The Rems-Murr waste management company in Backnang-Neuschöntal in Baden- Württemberg has two new energy-efficient combined heat and power plants in which methane from biogas plants is co-incinerated. From 2023 onwards, they will emit five times less nitrogen oxide than today.

On 23 October 2019, two new combined heat and power (CHP) plants of the municipal waste management company Rems-Murr (AWRM) went into operation in Backnang-Neuschöntal. They were built by the company ETW Energietechnik GmbH from Moers in North Rhine-Westphalia. For the renewal, the two old gas engines of the waste management company were replaced after 65,000 operating hours and more than eight years of operation. This resulted in a leap in efficiency, which is essentially based on the installation of the larger, more powerful gas engines as well as the further developed gas engine technology. In addition, fuel savings are achieved by using the residual methane content in the fermentation residue exhaust air.

ETW Energietechnik took a step-by-step approach to this: First the used CHP engines with 800 kilowatts (kW) each were dismantled. At the same place the company ins- talled two new larger gas engines with an electrical output of 1560 and 1200 kilowatts. These are each container CHP units, i.e. the power plants fit into a special container measuring 14 by 3.2 by 3 metres.

The heat utilisation concept contributes significantly to this high figure. The waste heat from the block-type thermal power stations is used to heat the fermenters and the operating building. The excess waste heat is then made available to the city of Backnang for drying sewage sludge.

„This was the first time that we have equipped an ETW plant in this way“, reports Alexander Szabo. The engineer is the responsible sales manager at ETW Energietechnik. The municipal waste management company hopes that this exchange will enable it to make CHP operation more variable in the future due to the higher engine output while maintaining the same gas quantities during the day. In addition, the waste management company is expecting an increase in the amount of electricity fed into the public grid.

For the pilot project, the fermentation residue exhaust air extracted from the liquid fertilizer storage tanks and the sedimentation tank of the biogas plant is cleaned by a gas washer-dryer and then fed into the combustion air supply of the gas engines. To avoid an ignitable mixture in the combustion air, the fermentation residue exhaust air freed from hydrogen sulphide (H2S) is continuously monitored by means of a gas analysis.

The system update is sustainable in that two expected changes in legislation in Germany are already being fulfilled:

One is the use of residual methane in the fermentation residue exhaust air to prevent the greenhouse gas from escaping. This system was designed by the planning company Ingenieurgruppe RUK GmbH from Stuttgart.

It has already been decided that CHP plants from 2023 may not emit more than 100 milligrams of nitrogen oxides (NOx) per cubic meter. Currently, this upper limit is 500 mg/m3. These values apply in each case at a residual oxygen content of five percent. This is stated in the Ordinance on Medium-Sized Combustion, Gas Turbine and Inter- nal Combustion Engine Installations, the 44th Federal Immission Control Ordinance (44th BImSchV), which was updated in June 2019.

In order to avoid later, costly retrofitting of the exhaust system, both cogeneration plants have therefore already been equipped with modern nitrogen oxide catalytic converters. The catalytic elements are mounted on a ceramic carrier. This SCR technology – SCR stands for „Selected Catalytic Reduction“ – is the only technology for reducing the amount of sick oxides (NOx) in the exhaust gas of the gas engine. The nitrogen oxi- des in the exhaust gas are composed of nitrogen monoxide (NO) and nitrogen dioxide (NO2).

To reduce nitrogen oxides, Adblue must be injected into the exhaust system – this mixture has a urea content of 32.5 percent. The high exhaust gas temperature converts Adblue into ammonia. The ammonia reacts with the nitrogen oxides on the catalytic surface of the catalyst elements with the following reaction formula: 4NO + 4NH3 + O2 4N2 + 6H2O
ETW Energietechnik has already installed some of the SCR catalytic converter elements. These reduce – even without urea injection – formaldehyde in the exhaust gas. Formaldehyde (CH2O) is converted into water and CO2. The complete SCR catalytic converter system including urea injection will not go into operation until 2023. In order to comply with the stricter limits, only minor retrofitting is then required due to the modern exhaust gas cleaning system (see below).

Retrofitting for NOx reduction In 2022, ETW Energietechnik will retrofit the two combined heat and power plants so that they can comply with the limit value for nitrogen oxides of 100 mg/m3 from 2023 onwards:

A urea tank, the stainless steel piping between urea tank and injection, a suction line into the gas engine and a urea dosing device are still needed. This requires an air compressor, pressure and temperature sensors, nitrogen oxide and oxygen sensors upstream and downstream of the catalytic converter. For this purpose, the catalyst housing is completely equipped with catalyst elements.

Building on its longstanding expertise of more than 35 years as a leading supplier of stretch films, Coveris now expands its capacities and further invests in its Kufstein plant. Following on from the recently announced major investment programme in Winsford UK, the second phase of this programme is now launched which expands and upgrades the technical capabilities in Kufstein, Austria through investment in a 5-layer specialist Agri Extrusion line.

The 5-layer extrusion investment in Kufstein significantly enhances its position as Centre of Excellence for Agri production and will allow Coveris to extend its product range to include additional premium quality silage films for high speed wrappers and challenging bale sizes. The new equipment will be installed and commissioned during quarter two 2020, and together with the Winsford investment increases Coveris silage wrap capacity to ~30k tons.

“This investment of 5-layer extrusion capability into Kufstein is an exciting development for Coveris as we seek to significantly expand our offering within the Global Agri films market. We now have Agri manufacturing centres in both Austria and the UK, allowing us to offer our clients a wider service proposition to add to our outstanding product and technical know-how built up over many years. Our reputation for high quality products can now be enhanced further through accelerated product development and innovation”, comments Martin Davis, President Business Unit Films on the Agri investment programme.

With Sinamics Startdrive commissioning software, Siemens supports machine builders in the validation of safety functions for Sinamics frequency converters with a guided acceptance test. With Sinamics Startdrive, Siemens offers a tool for the integration of drive hardware into the TIA Portal engineering framework. The integrated guided acceptance test for safety functions is available for Sinamics G and S series frequency converters and complies with EN ISO 13849-2 and IEC 62061.

The safety acceptance test is extremely user-friendly. A wizard guides the user step by step through the acceptance process and checks whether the safety functions have been parameterized correctly and executed correctly in the relevant application. For documentation purposes, a standard-compliant acceptance report is then created automatically. With the safety acceptance test integrated in Sinamics Startdrive, Siemens helps machine builders to carry out the legally required validation of safety functions easily and safely. 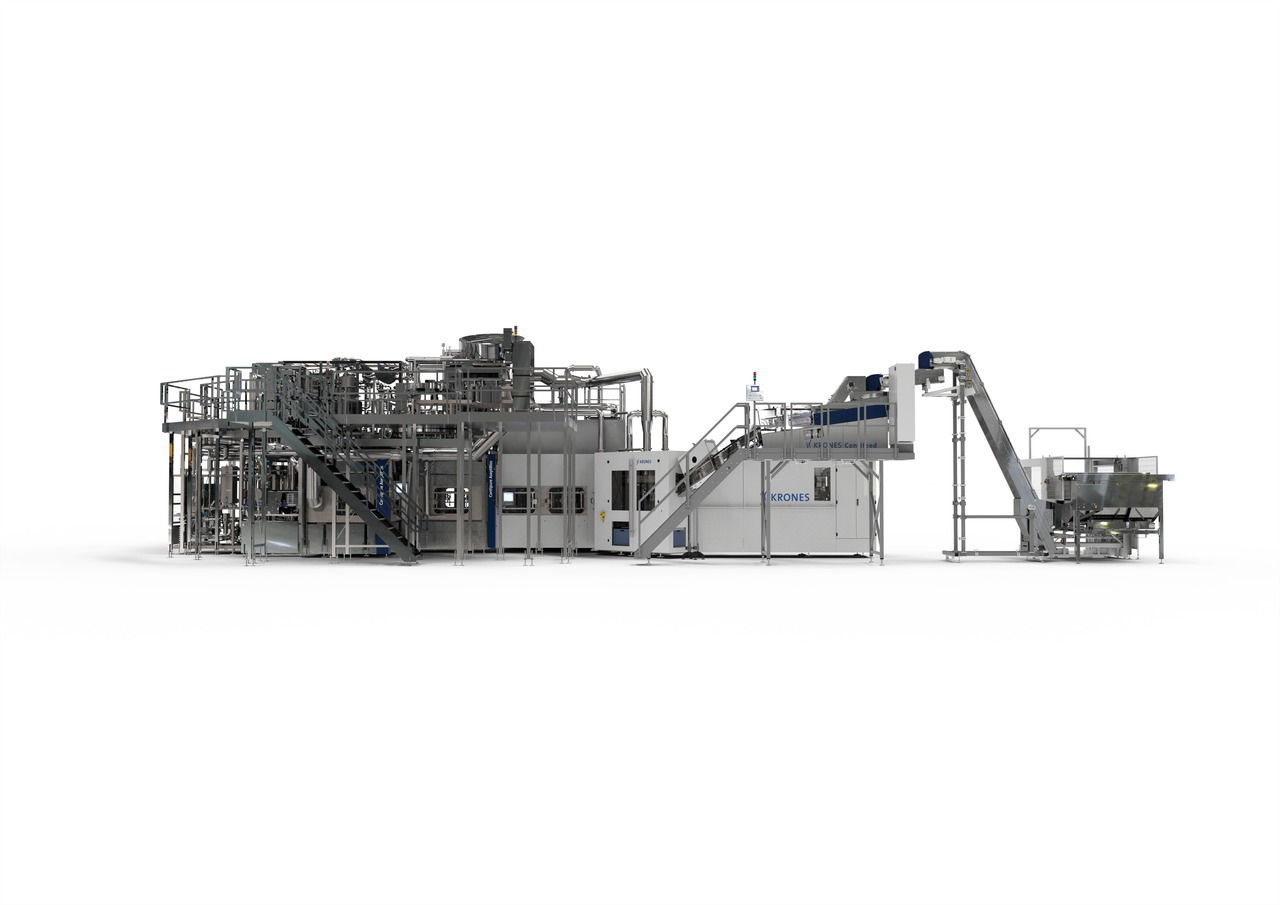 Patented solution for affixing the foil: a servomotor turns the bottles, while linear motors press the foil onto the containers with the aid of sponges. (Picture: Krones)

A label with creases, and a labeller that deliberately produces these creases – what for most beverage producers is a no-no was one of the paramount requirements of Mozart Distillerie in Salzburg. A look at the container’s shape explains the paradox: the liqueur bottles are spherical, to connote the world-famous “Mozart-Kugel”. The label, made of aluminium-coated paper foil, is required to fit snugly round the container – and to look as if it had been applied by hand.

Hitherto, Mozart Distillerie had been using what is meanwhile a 30-year-old labeller from a customised-machine manufacturer, which Plant Manager Friedrich Guggenberger had progressively individualised over the course of time with numerous design enhancements of his own. But the output no longer sufficed – and Mozart Distillerie was looking for a partner to jointly develop a new machine.

Because Krones’ corporate roots, of course, originate in labelling technology, the firm accepted the challenge – and combined the long years of practical experience and visions contributed by Friedrich Guggenberger and his team with the technical expertise of Krones’ own labelling specialists. And the results are truly impressive: a combination of features for precise container positioning, several inspection systems, and a multiplicity of technological customisation improvements ensure that Mozart Distillerie’s requirements are translated into engineered reality. For labelling, Krones is for the first time deploying a combination of one cold-glue and one wrap-around Contiroll labelling station, and pressure-sensitive body labels are applied to a sloping area. For affixing the foil, Krones developed a patented combination of a servomotor that turns the bottles, and linear motors that in twelve press-on operations use sponges to carefully press the foil onto the containers.

In order to ensure that the closure cap is correctly positioned as well, Krones has specially developed a guide rail that uses the sloping label area as an orientation reference point. These rails can be re-adjusted with only a few manipulations, so that all six sizes – from the small 50-millilitre to the large one-litre bottle – can be handled with the same system.

The new line is currently dressing around 5,000 bottles per hour, with an option for increasing the output to as much as 9,000 bph. It embodies two antithetical characteristics: the technology is fully automated to the latest state of the art, while the results, by contrast, reflect Mozart Distillerie’s craft philosophy.