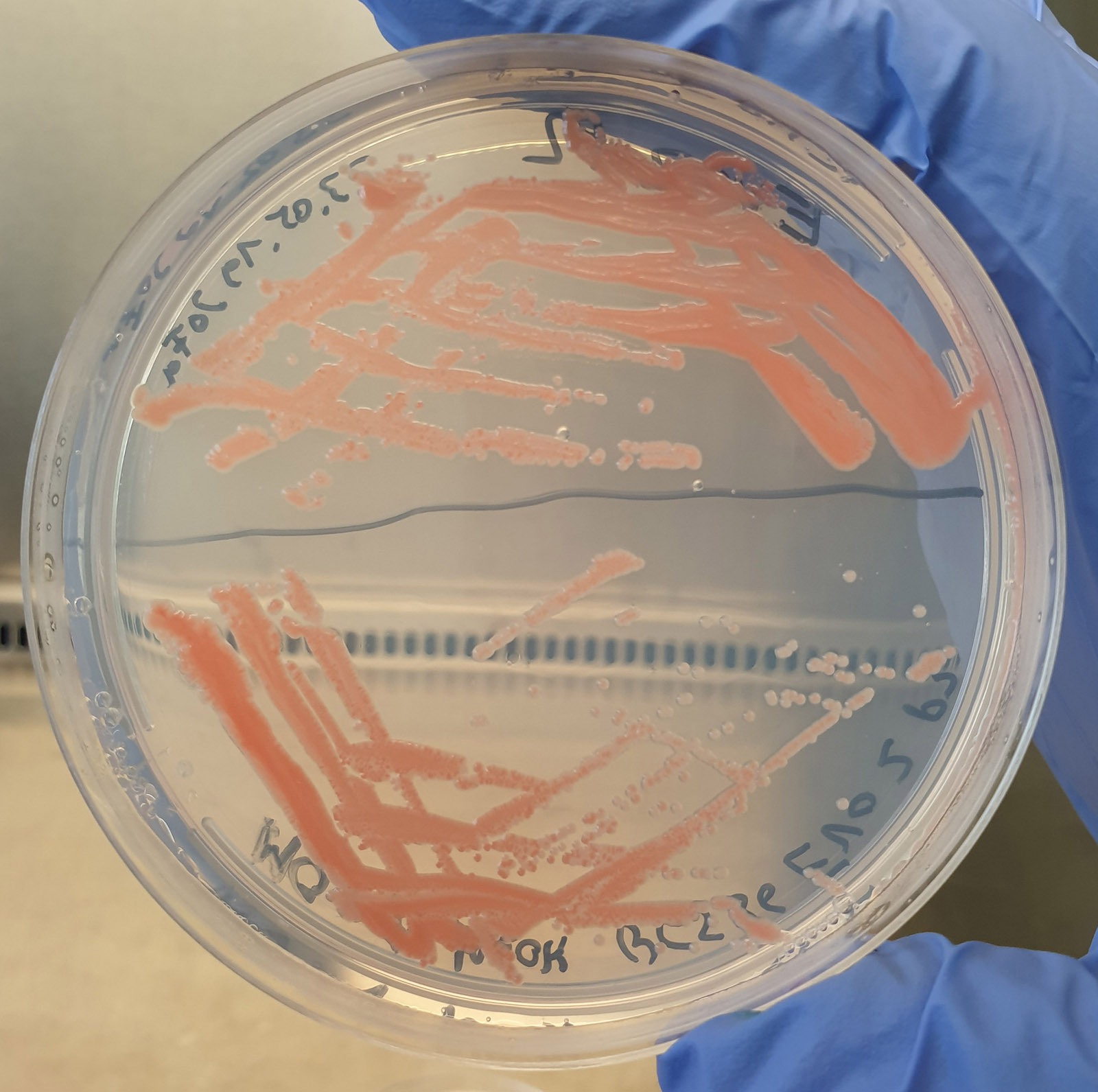 One of the main drivers of climate change is carbon dioxide – emissions must therefore be reduced in the future. Fraunhofer researchers are showing one possible way to reduce carbon dioxide emissions: They are using the greenhouse gas as a raw material, for example for plastics. To do this, they first produce methanol and formic acid from carbon dioxide, which they convert via microorganisms into building blocks for polymers and the like.

Researchers are currently developing approaches to this in the EVOBIO and ShaPID projects at the Fraunhofer Institute for Interfacial Engineering and Biotechnology IGB. They are working on both projects in collaboration with several Fraunhofer institutes.

The special feature, however, does not lie solely in this carbon dioxide-based methanol and formic acid production, but in the combination with biotechnology, or more precisely with fermentations by microorganisms. In simpler terms, the researchers first produce methanol and formic acid from the climate-damaging waste product carbon dioxide. In turn, they use these as “feed” for microorganisms, which produce further products from them. One example of such a product is organic acids, which are used as building blocks for polymers – carbon dioxide-based plastics could be produced in this way. Amino acids can also be produced in this way, for example as food supplements or animal feed.

The novel approach offers numerous advantages. “We can realize entirely new products, but also improve the carbon dioxide footprint of classic products,” Fabarius specifies. While conventional chemical processes require a lot of energy and sometimes toxic solvents, products can be produced with microorganisms under milder and more energy-efficient conditions – after all, the microbes grow in more environmentally friendly aqueous solutions.

The research team uses not only native methylotrophic bacteria – i.e. those that naturally metabolize methanol – but also yeasts that cannot actually metabolize methanol. The researchers also keep a constant eye on whether new interesting organisms are discovered and check them for their suitability as “cell factories”. But how do these microorganisms actually make the products? And how can you influence what they produce? “In principle, we use the microorganism’s metabolism to control product manufacture,” Fabarius explains. “To do this, we introduce genes into the microbes that provide the blueprint for certain enzymes – this is also known as metabolic engineering.”

The enzymes that are then produced in the microorganism in turn catalyze the production of a specific product. In contrast, the researchers specifically switch off genes that could negatively influence this production. “By varying the genes that are introduced, we can produce a wide range of products,” Fabarius is pleased to report.

The research team is working on the entire manufacturing chain: starting with the microorganisms, to the gene modifications, to the upscaling of production. While some manufacturing processes are still at the laboratory stage, other products are already being produced in the first bioreactors with a capacity of ten liters. As far as the industrial application of such processes is concerned, Fabarius sees this more in the medium to long term – ten years is a realistic time horizon, he says. However, the pressure on industry to establish new processes is increasing.

Research in the field of organic batteries

The so-called redox flow batteries (RFB) represent a promising concept for the storage of renewable electrical energy. In this type of battery, which is particularly suitable for stationary applications, the energy is stored in tanks with liquid electrolytes, while the power is determined by the area of the cells. RFBs based on vanadium salts as the energy carrier are particularly well developed. They are already used in numerous plants. However, vanadium also accounts for a significant proportion of the total cost of the battery, so cheaper alternatives are being sought.

One possibility is the transition from metal salts as energy carriers to organic molecules. Because of the wide variety of possible compounds, some of which can be produced from renewable raw materials, organic RFBs have been the subject of intensive research for several years. An important issue still to be resolved is the long-term stability of the organic energy carriers, which, unlike inorganic salts, can decompose during the electrochemical processes. A whole series of scientific questions also remain to be resolved with regard to the details of the processes at the carbon electrodes.

Over the next two years, Luis Fernando Arenas will be investigating organic redox flow batteries in Professor Thomas Turek’s research group at the Energy Storage Technologies Research Center (EST) of the Clausthal University of Technology in Goslar. Various projects on the development of vanadium-based RFBs have been carried out there in recent years, and the working group has extensive test facilities for measuring the performance data of RFB components such as electrodes, membranes and bipolar plates. The principles and methods developed in this work will now be applied to organic redox flow batteries.

Luis Fernando Arenas is a technical chemist who earned his master’s degree in 2013 from the University of Coahuila in Mexico. He then moved to the University of Southampton, where he obtained his PhD in 2017 in the renowned research group of Professor Frank C. Walsh with a thesis on RFB based on zinc and cerium.

Since then, he has continued as a visiting scientist at the University of Southampton and is a member of the Executive Committee of the Electrochemical Technology Group of the Society of Chemical Industry. He is also involved with the National Institute of Electricity and Clean Energy (INEEL) in Cuernavaca, Mexico, and consults for companies in the electrochemical industry, including chlor-alkali companies in Monterrey, Mexico. In 2019, he was awarded the Schwäbisch Gmünd Prize of the European Academy of Surface Technology.

In the middle of this week, an international ministerial conference was held to prepare a global agreement against marine litter and the pollution of the environment with plastic waste. The German Chemical Industry Association (VCI) and PlasticsEurope Deutschland (PED), the association of plastics producers, are in favor of the global effort. The conference was also convened at the initiative of Germany’s environment minister to push for a global agreement ahead of the UN Environment Assembly in spring 2022.

“Plastic waste has no place in the environment. It must be collected and recycled. A global agreement against marine litter can make a valuable contribution to this. In this way, we not only protect the oceans, but also the climate. The agreement should not focus on plastics, but on consumer goods in general that are carelessly disposed of in the environment.”

In March 2011, plastics associations set solutions against marine litter in motion with a global declaration. Currently, some 395 projects are underway or completed worldwide, including for better waste management, beach cleanups and educating local people. Innovative solutions for recycling and reuse of plastics play an important role in waste management. Therefore, Bühler points out, “Promoting innovative technologies for the circular economy should be a key concern in a global agreement. In the end, the aim must be to use waste to manufacture new products and thus conserve resources.”

The German chemical industry also sees a great opportunity in the recycling of plastics: “Plastics are far too good to end up as waste in the environment. If they are recycled, this reduces the use of fossil raw materials and protects the climate. This is where we need to rethink in parts: That’s why we are massively pushing complementary technologies such as chemical recycling,” adds Wolfgang Große Entrup, CEO of the VCI.

In the “H2FastCell” research project, a research team from Fraunhofer IPA and the Black Forest Campus is working with an industrial consortium to develop a robotic cell for the automated high-speed assembly of fuel cell stacks. In doing so, they are laying the foundation for industrial mass production of this emission-free technology. Hydrogen will play an important role as an energy carrier. It can be produced from renewable energies in electrolysers in a CO2-neutral way and then converted into electrical energy in fuel cells. Particularly in freight transport, fuel cells can play out their advantages over battery-electric vehicles. But there are also many future areas of application for fuel cells in the stationary sector. In the production of fuel cells, efficient cycle times and absolute precision are crucial.

The major goal is to reduce manufacturing costs in order to make the use of this technology more economical. However, this can only be achieved through scaling effects, which require fully automated plants with correspondingly high capacities. At the moment, this type of production plant is not yet available on the market, and the design of the components must also continue to be optimized with regard to automation-compatible construction.

That’s why it makes sense to start looking now for ways to manufacture them in an automated way that is suitable for mass production. This is precisely what a research team from the Fraunhofer Institute for Manufacturing Engineering and Automation IPA and the Center for Digitalization, Leadership and Sustainability Black Forest (Black Forest Campus) has set out to do in the “H2FastCell” project. Together with teams from five companies, the scientists want to develop a robotic cell by 2023 that assembles the individual layers of a fuel cell in seconds and with absolute precision.

13 minutes to the finished stack

A fuel cell stack consists of stacked layers of bipolar plates, through which hydrogen and oxygen are introduced, and membrane electrode units, in which the two chemical elements react with each other. Because this reaction only produces a voltage of one volt at most, about 400 fuel cells must be stacked on top of each other for a fuel cell engine to power a truck, for example. Precision is required here. Any deviation – even in the micrometer range – can reduce the performance of the fuel cell system.

The assembly robot, which will take over the stacking of bipolar plates and membrane electrode units in alternation in the H2FastCell research project, will therefore scan the individual layers as it grips them. Since he stacks several stacks in parallel, he can spontaneously assign a layer to the stack on which the dimensions fit best. Performance degradations are thus avoided before they occur. All this is supposed to happen so fast that it will be difficult for humans to follow the individual assembly steps with the naked eye: one second per layer. A stack composed of 400 individual fuel cells would therefore be finished after only about 13 minutes. Manually, many times that time would be needed.

Prices for fuel cells could fall

“If the throughput of the stacks is increased in this way, it will lay the foundation for the industrial mass production of fuel cells. Prices would fall and the use of fuel cells in mobile heavy-duty applications would finally become competitive,” says Friedrich-Wilhelm Speckmann of the Center for Digitized Battery Cell Production at Fraunhofer IPA. He and Erwin Groß from the Corporate Strategy and Development department at Fraunhofer IPA are leading the H2FastCell research project.

By summer 2023, the research team aims to have set up a demonstrator stacking facility for automated fuel cell assembly at the Schwarzwald Campus in Freudenstadt. This facility will be available to companies for further trials, feasibility studies and validations.

“With this first project, we are laying the foundation for our future research center for biointelligent hydrogen cycle management in the Black Forest. With this, we want to make hydrogen technology usable for mobile and stationary use as an energy carrier together with companies in Baden-Württemberg.”

The H2FastCell research project started on July 26, 2021 and is scheduled to run for two years. In addition to Fraunhofer IPA and the Black Forest Campus, five companies from Baden-Württemberg are involved: the software developer ISG Industrielle Steuerungstechnik GmbH from Stuttgart, the vacuum technology manufacturer J. Schmalz GmbH from Glatten in the northern Black Forest, the sensor producer i-mation GmbH from Rottweil, the machine and plant manufacturer teamtechnik Maschinen und Anlagen GmbH from Freiberg am Neckar, and the automation engineer WEISS GmbH from Buchen in the Odenwald. The Baden-Württemberg Ministry of Economics, Labor and Tourism is funding H2FastCell with around 2.3 million euros.