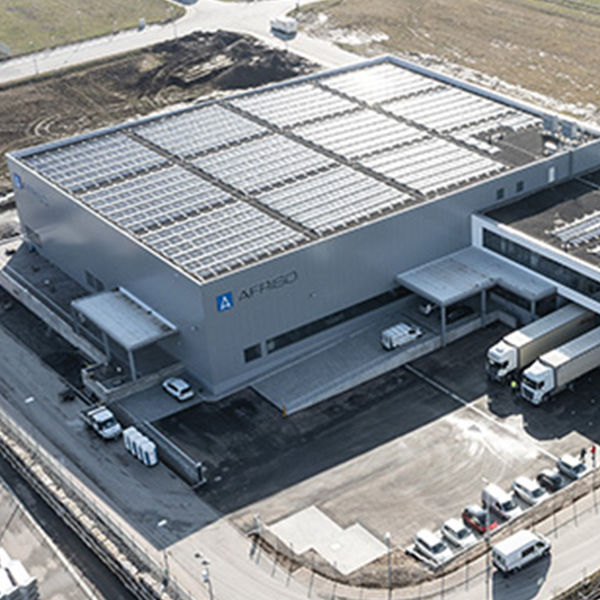 Transportation projects require staying power and reliable partners: More than ten years passed from the planning to the opening of the extension of Berlin’s subway line 5. The fact that the underground platform hall at the Red City Hall now looks even more impressive in reality than the plans promised – is not least due to the lighting with WE-EF.

At the Red City Hall, the seat of Berlin’s state government, architect Oliver Collignon created an underground station that underscores and celebrates the importance of the site for the city’s citizens – with a design that is as clear in form as it is generous and representative. The 140-meter-long platform hall, with its radiantly light floors and ceilings, dark, subtly glittering walls of polished concrete cast stone, and striking mushroom supports, is a sight worth pausing for: For example, on the connecting gallery between the two platforms, which is fully glazed towards the concourse. The short escalator ride through the all-anthracite stairwell then heightens the dramatic effect of stepping back into the light of the hall and being able to experience its spatial feeling directly.

Accompanied by the lighting designers from Licht Kunst Licht, the architect eschewed the complexity of additional lighting structures in favor of pure downlighting integrated into the concrete ceilings. The calculated interplay with the reflection of the white floors and ceilings produced the desired, pure lighting effect – with a high level of visual comfort for the station’s users. The designers responded to the different ceiling heights of the hall and intermediate levels with appropriately adapted luminaire wattages and beam angles in order to achieve sufficient vertical illuminance on the side wall in the connecting bridge, for example. The ends of the platforms, where ceiling projections prevent the use of downlights, are each marked by pairs of recessed floor luminaires.

The elegance of this lighting solution lies in the captivating simplicity of its appearance: the WE-EF recessed luminaires are lined up like a string of pearls, with a precise recessed detail that recesses a few centimeters into the ceiling surface. A convincing result that does not show its long and not at all simple history of creation. After all, the usual processes in building construction were literally turned upside down here – with a massive impact on the planning, logistics and installation of the lighting. The station, which is located directly below street level, was built using the so-called “wall-base-cover” construction method.

This involved first concreting lateral diaphragm walls and then a watertight base as the lower construction pit boundary. The excavation pit was then given a “lid”, which at the same time already formed the later station ceiling. Accordingly, the heads of the mushroom-shaped columns were also completed early in the structural work – the columns themselves, on the other hand, did not grow upwards from below until later, while the soil for the hall was being excavated. This had consequences for the ceiling-integrated lighting concept: The first step for installation, namely the assembly of concrete recessed housings, took place very early in the project. As early as 2013, WE-EF supplied the customized modified housings, which, in addition to a formwork element for the recessed installation detail, also had additional entries for redundant wiring. In terms of fail-safety, the later operator, Berliner Verkehrsbetriebe (BVG), did not want to take any risks.

Setting the course for LED at an early stage

No risk – this also applies to the choice of WE-EF as a manufacturer that was trusted to be able to supply the precisely matching recessed luminaires even several years after the installation of the concrete housings. Already in the planning phase at the beginning of the 2010s, it became apparent that LEDs would replace the HIT discharge lamps commonly used at that time. Together with WE-EF, the architect and lighting designer opted for the future-proof technology. This also allowed the safety lighting to be seamlessly integrated into the concept, and the freedom from maintenance was another argument in favor of LEDs in view of the continuous operation of the lighting underground. When the luminaires were finally delivered and installed in 2017 as part of the expansion of the hall, their efficiency and lighting quality exceeded all expectations of those involved – that’s how positively LED technology had developed within just a few years.

When the new U5 line was ceremoniously opened in December 2020, the lighting of the Rotes Rathaus subway station had already been doing its job completely unobtrusively for several years. A total of 70 luminaires of the type WE-EF DOC240 are mounted above the platforms. With 24 LEDs in warm white (3000 K) and a connected load of max. 48 W, they produce a symmetrical medium-beam light distribution. In addition, more than 100 DOC220 recessed luminaires with 12 LEDs and likewise symmetrical medium-beam optics are installed in the areas with lower ceiling heights. At the ends of the platforms, ETC140 recessed floor luminaires with 24 LEDs in 3000 K are installed and provided with slip-resistant ceramic coating “ASC” according to DIN 51130. Continuity both in the product structure and in the project support – how important such aspects are for clients like BVG is shown by the fact that WE-EF also supplied lighting systems for the two other new stations of the U5 line, which were also individually designed by renowned architects.

On July 21, 2021, Helmfried Meinel, Ministerial Director at the Baden-Württemberg Ministry of the Environment, visited the wastewater treatment plant in Tübingen, where he inaugurated the construction of the so-called fourth treatment stage. The fourth treatment stage will allow residues of pharmaceuticals and household chemicals to be filtered out of wastewater. “The elimination of trace substances is precautionary water protection,” Meinel emphasized. In Tübingen in particular, this plays a major role, he said, because it means that fewer trace substances end up in the Neckar River.

The Ministerial Director explained that Tübingen is only the second wastewater treatment plant in Baden-Württemberg, after the treatment plant in Eriskirch, to use an ozonation plant with downstream filtration for the elimination of trace substances. “Tübingen is thus one of the pioneers for this process combination in Baden-Württemberg. The big advantage is that it has a broad effect.” He said it is effective for a wide range of pharmaceuticals, hormones and numerous other substances. Even germs can be removed from wastewater.

With a view to prevention, Meinel explained further, the Ministry of the Environment began several years ago to support the expansion of wastewater treatment plants with innovative processes for the so-called fourth purification stage for the elimination of trace substances. In doing so, the state is concentrating on particularly sensitive bodies of water, as well as large wastewater treatment plants and pollution hotspots.

“On this basis, 20 wastewater treatment plants in Baden-Württemberg are now equipped with a targeted purification stage for the removal of trace substances, and another 23 with this special technology are under construction or in planning.”

The state is contributing almost three million euros to the total eligible costs in Tübingen of almost 13.8 million euros. “This is money well invested,” Meinel said. In addition to the city of Tübingen, the municipalities of Ammerbuch and Rottenburg are also financing the expansion.

The ministerial director also praised the fact that with the completion of the expansion and the commissioning of filtration in Tübingen, phosphorus elimination has now been raised to an even better level. “Aquatic animals and plants also benefit from this, because the ecological condition in the Neckar can be noticeably and sustainably improved.”

The heavy rain and flooding not only claimed lives, but also caused enormous economic damage. To account for the material damage, the finance ministries of the states of North Rhine-Westphalia and Rhineland-Palatinate as well as the Bavarian State Tax Office have each enacted disaster decrees. Thomas Loibl from Ecovis in Landshut explains which tax support measures flood victims can receive.

What happens if my accounting records were destroyed by the water?

If accounting documents and other records have been destroyed or lost due to the storm, there are no adverse tax consequences to be drawn from this. Important: The affected taxpayer should document the destruction or loss in a timely manner and, to the extent possible, provide proof or credible evidence.

What can business owners do to mitigate the significant financial burdens?

The respective disaster decrees contain more than 20 tax support measures for taxpayers who are directly and not insignificantly affected – for private individuals as well as special regulations for entrepreneurs. Some examples from both:

Deferral and enforcement measures as well as adjustment of advance payments.
Note: Affected parties can submit the applications until October 31, 2021.

Deferral and remission applications for trade tax.
These applications must be submitted to the municipalities.

Special depreciation options for reconstruction
This allows expenses on a larger scale to be taken into account immediately to reduce taxes.

Special regulations for agriculture and forestry and income from renting and leasing
Farmers and landlords can take advantage of additional support measures.

Possibility to waive property tax
Interesting for all house and apartment owners.

How are donations eligible?

The obligation to provide proof of donations has now been simplified. In addition, donation campaigns can also be organized by non-profit corporations that, according to their articles of association, do not promote charitable purposes, for example, or are regionally bound.

Furthermore, so-called donations from wages and salaries are possible. In this case, an employee waives payment of part of his or her salary. The employer pays this amount into a donation account of an institution entitled to receive donations. The donated portion of the salary is then not taken into account as wages. No payroll tax or social security must be paid. “However, the employer must fulfill and document the use requirement. Important: The donated salary must be recorded in the payroll account,” says tax consultant Thomas Loibl.

Tip: Even expenses for existentially necessary items (apartment, household goods, clothing) can be taken into account for tax purposes. In exceptional cases, these can be deducted as extraordinary expenses.

Its clients specialize in medical technology, diagnostics, biotechnology and pharmaceuticals. The acquisition doubles Welocalize’s portfolio of leading global life sciences brands. The company has extensive expertise in providing language services to highly regulated companies. These services include medical translation and in-country reviews, as well as regulatory consulting for software localization. The merger will significantly expand Welocalize’s presence in Europe, the central hub of the life sciences industry. As a result, the company further increases its customer accessibility.

“We are very pleased to add NLG to the family. We were impressed by their focus on customer relations and offering efficient language programs. Through our combined competencies, we can help clients achieve added value, a compelling customer experience, and higher performance measured against their respective business objectives. Together, we continue to transform life sciences language services.”

Working together to deliver translation projects at a rapid pace

Over the past 18 months, the life sciences industry has been under tremendous and unprecedented pressure to accelerate the design of communications and the global transmission of information. Going forward, the two companies will work together with their customers to provide a better customer experience, high-quality language services and proprietary technologies for in-country reviews and project submission through intelligent workflow solutions.

“We are excited to join forces with such an innovative and customer-centric company that strives to further develop our highly customized solutions for the brands we work with,” said Michael Oettli, founder and CEO. “Our experienced team understands the demanding medical device and diagnostics industry and provides personalized services to our long-standing clients,” adds Nicole Sheehan, Vice President of Customer Success for Regulated Services at Welocalize. “The two groups share the same passion for excellence and innovation and are supported by global teams that ensure we put the customer experience at the center of everything we do. By bringing together our people, operations and technology, we can better position ourselves to enable our customers to achieve their business goals and accelerate global growth.”

Expanding portfolio in a regulated industry