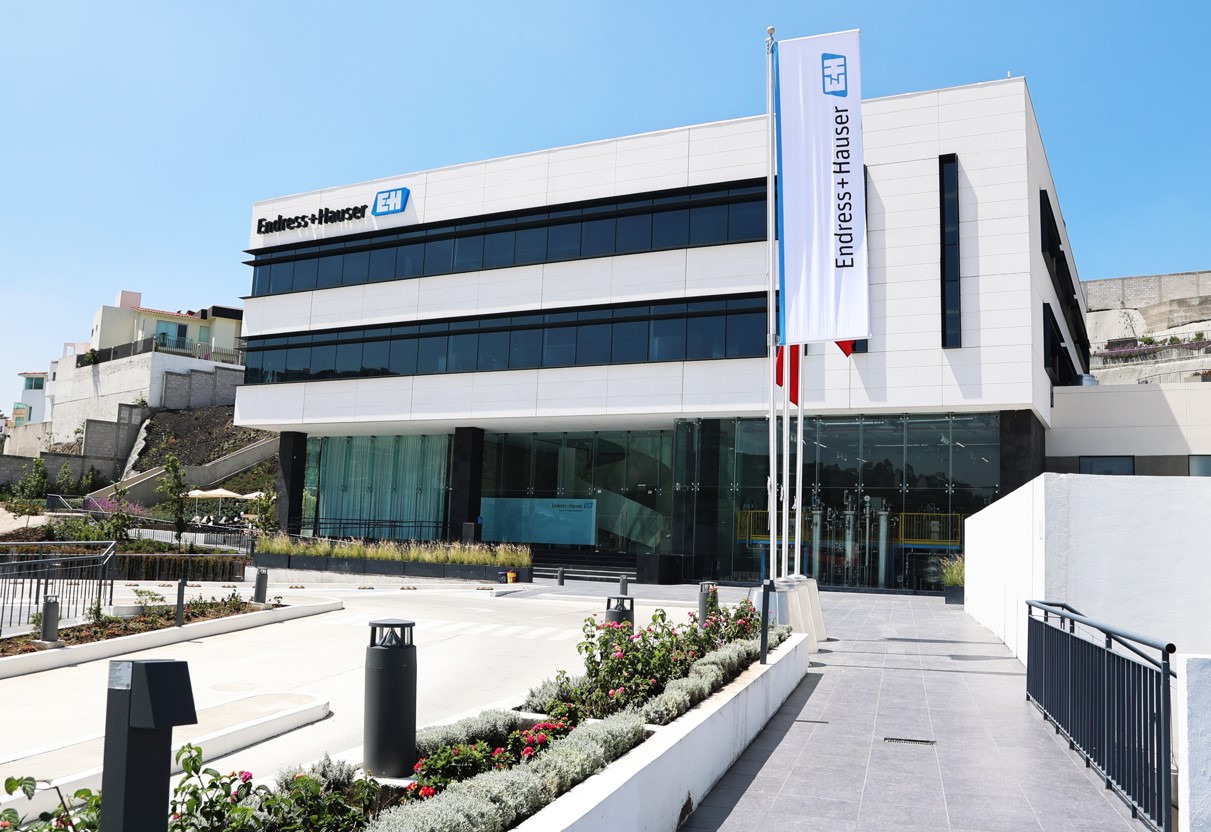 The building in Naucalpan reflects the solid growth of the Sales Center in recent years. It demonstrates a connection with the market and customers and enables further growth. At the heart of the building is a process training center where customers can practice using a variety of measurement instruments and simulate conditions similar to their own operating environments. Working together with experts from Endress+Hauser, they can then develop new solutions for their applications.

The building features numerous spaces and facilities designed with the needs of the employees in mind, allowing them to flourish and feel at home in their new work environment. The amenities include a gym, a nursing room for mothers, and a library, plus various places for individual and collective work in open spaces to ensure that the day-to-day work activities can be carried out in a productive and attractive setting.

Endress+Hauser places a value on sustainability and energy efficiency with all of its construction projects. The new building in Mexico thus features solar panels. In addition, a water treatment and cleaning system was developed that feeds 7.2 cubic meters of water into the climate control and plumbing systems on a daily basis. Because of these measures, the new building was certified gold under the LEED system (Leadership in Energy and Environment), proving that it achieves significant energy and resource savings over its lifetime.

Emerson has introduced the Rosemount 3408 Level Transmitter, a non-contacting radar device designed to optimise ease-of-use at every touchpoint, leading to increased site and worker safety and enhanced plant performance. The Rosemount 3408 is a versatile level measurement solution, suitable for use in a wide range of industries and applications, such as chemical storage, mixing tanks and open air applications.

While the benefits of radar level measurement are widely acknowledged, leading to the technology’s fast-growing adoption across multiple industries, radars are still sometimes perceived as being complex to commission, operate and maintain. Addressing this concern, the device provides a range of functions that reduce complexity throughout its lifecycle, including a highly intuitive interface, Bluetooth wireless technology remote capabilities, predictive alerts, in-situ verification, data historian and an upgradeable design.

The new device is based on frequency modulated continuous wave (FMCW) technology, which enables extremely accurate and reliable measurement, even in challenging process environments. It is also suitable for use in critical safety applications such as overfill prevention, as it is Safety Integrity Level (SIL) 2-certified and designed according to the International Electrotechnical Commission’s IEC 61508 standard relating to functional safety.

The transmitter can be proof-tested remotely and in-situ, which makes the procedure quick and easy, saving time and increasing plant and worker safety. In the event of device failure, its exchangeable design enables the simple replacement of a cassette within the transmitter housing, rather than replacing the entire transmitter head. This saves both time and materials, making the device extremely cost-effective.

“The new generation of engineers expect modern automation technology to be very easy to implement, operate and maintain,” said Thense Korsbo, director of product management for Emerson’s radar level measurement business. “The onus is therefore on us to provide solutions that simplify operator tasks as much as possible, especially in safety-critical applications such as overfill prevention, and this was Emerson’s focus when designing the Rosemount 3408. This optimised ease-of-use will help organisations improve plant efficiency, reach their production targets and achieve the highest levels of safety.” 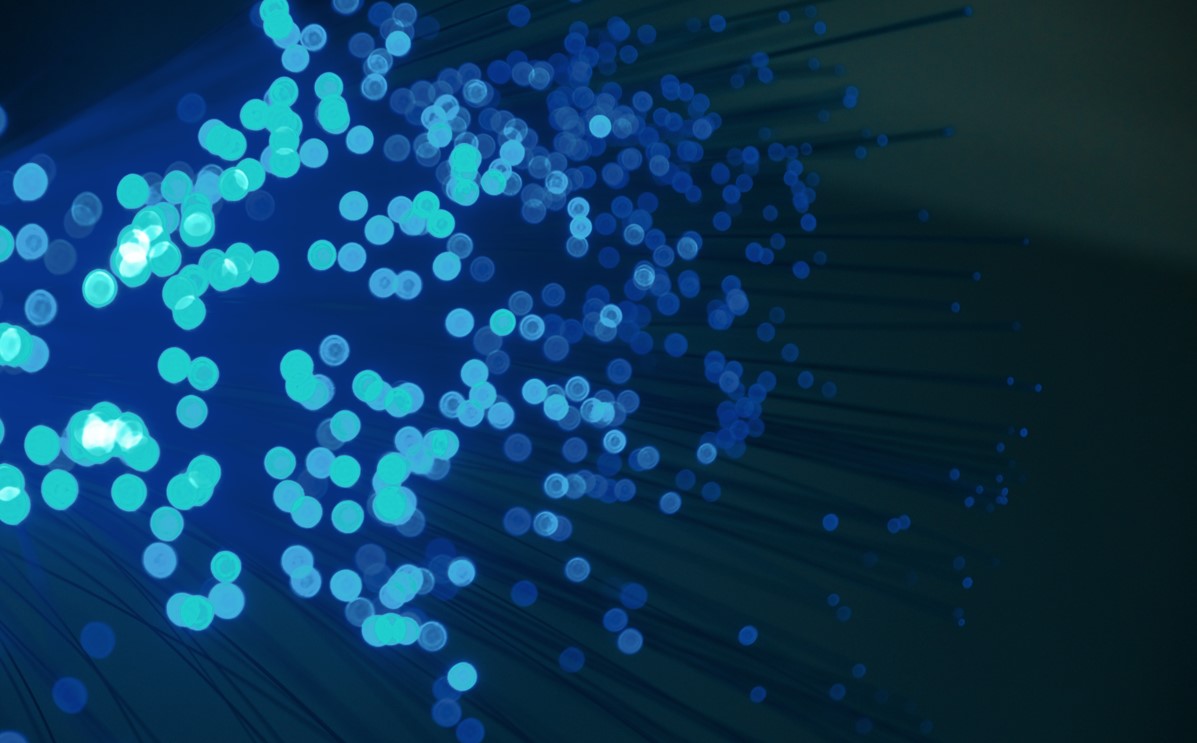 Together with the National Institute of Technology, Kitakyushu College and Tokyo University of Science Asahi Kasei, a diversified Japanese multinational company, has developed a new technology for recycling carbon fiber plastic compounds. 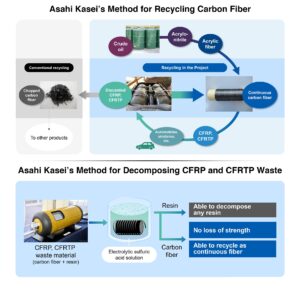 Carbon fiber reinforced plastics (CFRP) are highly attractive for various industries in demanding application fields due to their unique balance of rigidity, mechanical strength and light weight – also compared with conventional glass fiber reinforced plastics. However, CFRPs are expensive and challenging from a recycling perspective, as it is difficult to extract the carbon fibers from the resin after usage. 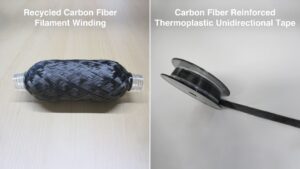 The conventional technologies for recycling carbon fibers by chopping and re-applying them results in a product with lower quality and less durability, insufficient for high-performance applications. To address this issue, Asahi Kasei has developed an “electrolyzed sulfuric acid solution method” that allows the carbon fiber to retain its original strength and continuous nature while fully decomposing the resin the carbon fiber is embedded in. This allows for its continued use in high-performance applications and presents an inexpensive, circular solution to the end-of-life dilemma of carbon fiber plastic compounds. Thus, these carbon fiber compounds present in vehicles for weight reduction. It can be easily and inexpensively be broken down at end-of-vehicle-life and reapplied to new vehicles in the future. In addition, Asahi Kasei is developing a carbon fiber reinforced thermoplastic unidirectional tape (CFRTP-UD tape) that utilizes both recycled continuous carbon fiber and the company’s Leona polyamide resin. Boasting a higher strength than metal, this CFRTP-UD tape can be applied to automobile frames and bodies, further enabling the recycling of end-of-vehicle-life parts into different, new automobile parts. This presents a solution to the long-term challenge that carbon fiber usage for vehicles has posed on the industry and is expected to economically benefit and strengthen carbon fiber’s usage within the automobile industry on a global scale. Moving forward, Asahi Kasei will perform demonstrations and develop the business, aiming for practical application around 2030. 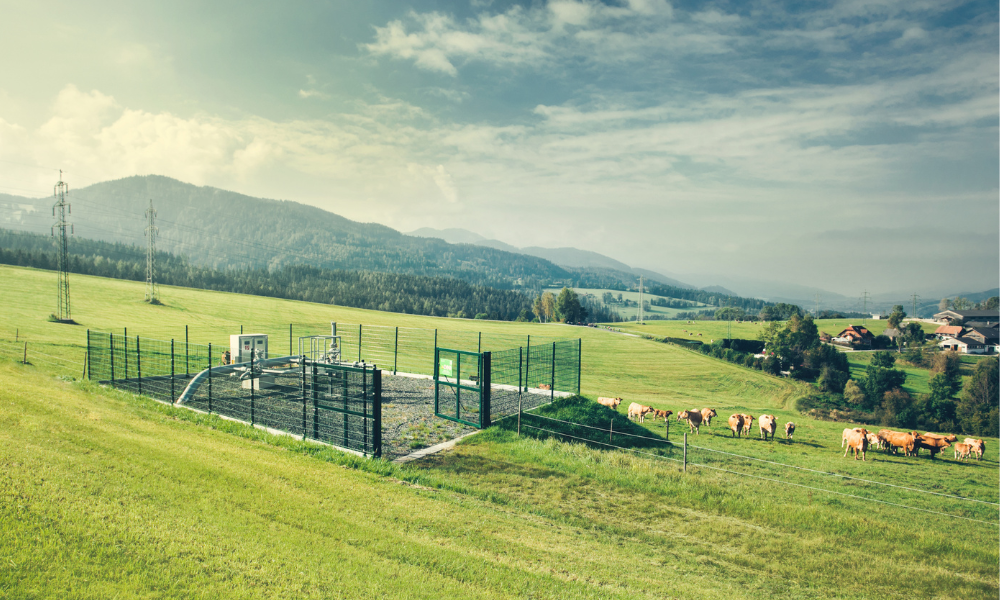 Climate-neutral hydrogen has an important role to play in Europe’s efforts to achieve its net zero greenhouse gas emissions target by 2050. By then, hydrogen will have replaced fossil fuels in many areas. The existing natural gas infrastructure is key to successfully transporting hydrogen. In the future, pipelines that were previously used for natural gas are to transport hydrogen to consumers. The European Hydrogen Backbone Initiative has also developed an implementation concept for hydrogen pipeline infrastructure that relies largely on converted natural gas pipelines.

Since October 2022, the “HyGrid2” project, supported by the Austrian Research Promotion Agency (FFG), has been conducting studies to facilitate the transport of pure hydrogen using existing natural gas infrastructure. A consortium consisting of the “Österreichische Vereinigung für das Gas- und Wasserfach” (Austrian Gas and Water Association – ÖVGW), research institutions and industrial services provider Bilfinger, under the leadership of Energienetze Steiermark, aims to put the knowledge gained in “HyGrid2” to use in an effort to answer open questions by 2025. The findings are expected to make future conversions possible. These include the inspection and cleaning of the pipelines, the quality of the transported hydrogen, theapplication-oriented purification of H2, and the H2 compatibility of the individual components and materials used.

In the course of the project, the first Austrian natural gas steel pipeline section in the grid territory of Energienetze Steiermark will be converted for hydrogen transport and developed into a demonstration plant with the help of Bilfinger’s Austrian subsidiary Bilfinger Industrial Services. The former natural gas pipeline will be operated with pure hydrogen under realistic conditions in order to gather insights needed for practical application.

The special challenge presented by the conversion lies, on the one hand, in the requirements for the purity of the piping systems. For existing pipelines that are converted to transport hydrogen, the previous use is relevant and has an impact on the quality. An additional factor in the “HyGrid2” pipeline conversion project is that the network section was operated with odorized gas, which means that gas that was mixed with odor-intensive substances: In Austria as well as in some other countries such as France and Norway, the nearly scentless natural gas is odorized with sulfur-based compounds when it enters the gas distribution network in order to make an unintentional gas leak detectable at an early stage. Within the framework of HyGrid2, studies to determine what impact piping systems that were used for odorized gas could have on the quality of transportable hydrogen are therefore essential for the operation of converted pipelines.

As part of its “Green Gas 4 Grids” research program, ÖVGW has already conducted the “HyGrid” pilot study to investigate which impurities can occur in the hydrogen when it flows through pipelines that have been repurposed from natural gas pipelines to pure hydrogen pipelines. Such impurities can include odorants or other components of natural gas.Another challenge is the material suitability of the existing infrastructure for hydrogen transport. Here, in contrast to natural gas, so-called “hydrogen embrittlement” can occur, i.e. diffusion and dissolution of hydrogen in the microstructure of metal pipes. Over time, this can lead to pipeline damage and thus to the formation of leaks. Bilfinger intends to use the pipeline demonstrator to test the existing natural gas infrastructure for its suitability for hydrogen transport using various non-destructive testing methods and to modify it in whatever way necessary.

“HyGrid2” further aims to put the results of the pipeline demonstrator to use in order to create a manual for successful natural gas pipeline conversion. This manual will cover the technical, economic and legal framework conditions and will include the current state of science as well as the regulatory requirements and organizational processes. The reference manual will serve as a guideline to accelerate the conversion of natural gas pipelines for H2 transport in the future, sothat green hydrogen can realize its potential for a fully sustainable and independent energy

HyGrid² is a research project funded by the Climate and Energy Fund and conducted as part of the “Model Region Energy” WIVA P&G program.