Merck, a science and technology company, generated strong net sales growth in the second quarter of 2019, primarily on an organic basis. EBITDA pre grew very strongly and was also driven by organic performance. The firm confirmed its full-year forecast for 2019.

“We achieved sales growth in all business sectors and regions. The jump in earnings was due to the very good business performance of Life Science as well as the milestone payments in Healthcare. These payments are evidence of our successes in developing innovative medicines,” said Stefan Oschmann, Chairman of the Executive Board and CEO of Merck. “For the full year 2019, we continue to assume growth for the Group key figures, namely sales, EBITDA pre and EPS pre.”
In the second quarter, Merck generated net sales growth of 6.9% to € 4.0 billion (Q2 2018: € 3.7 billion). Organic sales growth amounted to 5.6%. Merck grew organically in all regions, with especially strong growth in Asia-Pacific, its largest reporting region. Sales also increased due to slightly positive exchange rate effects of 1.5%, which were primarily due to the U.S. dollar and the Japanese yen, as well as a slightly negative portfolio effect of -0.2%.

EBITDA pre, the Group’s most important earnings indicator, rose sharply by 23.8% to € 1.1 billion in the second quarter (Q2 2018: € 920 million). The increase primarily stemmed from organic growth of 20.3% and was driven by the milestone payments in Healthcare and the very good performance in Life Science. It was supported by positive exchange rate effects of 3.3% and slight portfolio effects of 0.3%. Accordingly, Group EBIT also grew very strongly, increasing by 57.6% to € 618 million (Q2 2018: € 392 million).

All business sectors contribute to sales growth in the first half

Sales by the Healthcare business sector grew organically in the second quarter by 5.2%. Including slightly positive foreign exchange effects of 0.7%, net sales of Healthcare amounted to € 1.7 billion (Q2 2018: € 1.6 billion). Organic growth was primarily driven by the General Medicine & Endocrinology franchise, Erbitux as well as the two new medicines Mavenclad and Bavencio; furthermore by the Fertility franchise.

Sales of Mavenclad, an oral medicine for the treatment of multiple sclerosis, tripled to € 61 million (Q2 2018: € 20 million), supported by regulatory approval in the United States at the end of March. The good performance of Mavenclad partly offset the declines in sales of Rebif. In the second quarter, sales of Rebif, which is used to treat relapsing forms of multiple sclerosis, declined organically by -16.1%, particularly as a result of the persistently challenging competitive environment in North America. Including currency tailwinds of 2.5%, Rebif sales amounted to € 331 million (Q2 2018: € 383 million). Sales of the immuno-oncology drug Bavencio totaled € 23 million (Q2 2018: € 17 million). Sales of the oncology drug Erbitux grew organically by 5.7%; the addition of Erbitux to the National Reimbursement Drug List in China was a major driver of the good development of Erbitux sales in Asia. Including negative foreign exchange effects, sales amounted to € 212 million (Q2 2018: € 203 million). Gonal-f, the leading recombinant hormone for the treatment of infertility, saw organic growth of 2.8%, generating sales of € 191 million (Q2 2018: € 184 million). The General Medicine & Endocrinology franchise, which commercializes medicines to treat cardiovascular diseases, thyroid disorders, diabetes and growth disorders, among other things, generated very strong organic growth of 10.1%, yielding net sales of € 640 million (Q2 2018: € 580 million). Delivering organic sales growth of 31.9% primarily thanks to demand in China, the diabetes medicine Glucophage was the main driver of this development.

EBITDA pre of Healthcare rose organically in the second quarter by 37.3%. Including a slightly positive exchange rate effect of 2.2%, it amounted to € 528 million (Q2 2018: € 379 million). It included multiple milestone payments. This demonstrates the achievements of Merck in the discovery and development of innovative medicines. On May 15, the U.S. Food and Drug Administration (FDA) granted regulatory approval of Bavencio in combination with axitinib as a first-line therapy in patients with advanced renal cell carcinoma (RCC). For this, Merck received a milestone payment of around € 35 million from its alliance partner Pfizer. The upfront payment amounting to € 300 million from the alliance with GlaxoSmithKline to co-develop and commercialize the immunotherapy bintrafusp alfa also had a positive effect of € 31 million in the second quarter. Merck also received a milestone payment of € 75 million from BioMarin Pharmaceutical in connection with the sale of the rights to Palynziq (Peg-Pal) in 2016. 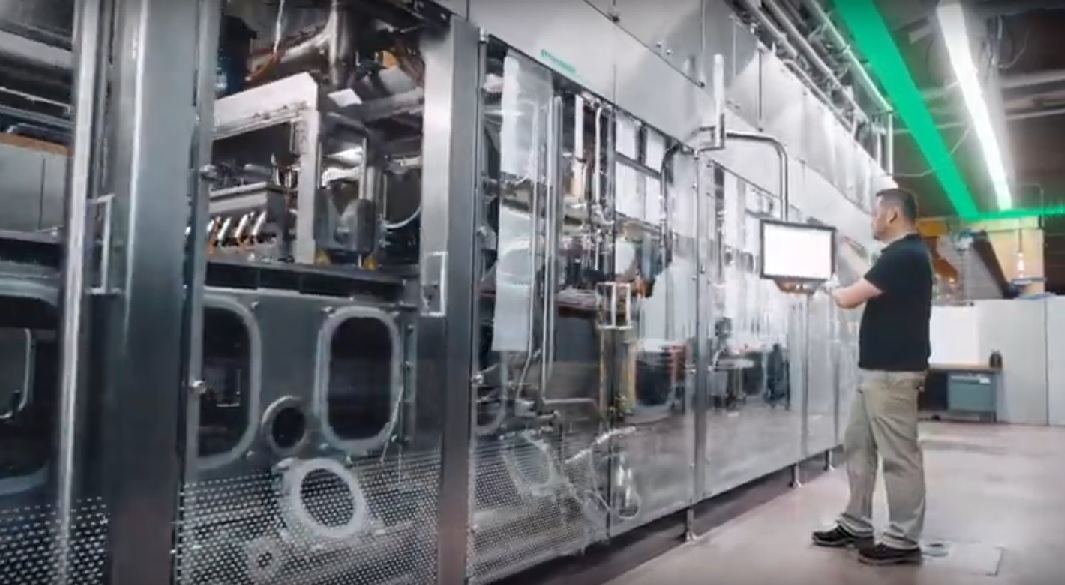 Syntegon – the new name in processing and packaging.

Formerly Bosch Packaging Technology – Today: Syntegon. Your global partner for processing and packaging technology in the pharmaceutical and food industries.

Syntegon is a supplier of process and packaging technology. Wether it is dry, liquid, aseptic, clean or ultra-clean we have the perfect solution to pack your valuable goods and if needed we track them around the world. Processing and packaging for a better life. That´s what Syntegon Technology stands for.

With two new clear and opaque laminated options for its high-moisture barrier films, Honeywell’s Aclar gives companies cost-effective alternatives for product packaging with shorter lead times to increase shelf life, decrease operating costs and protect drugs in climates throughout the world. While the original Aclar is clear and customizable, Aclar Accel 1700 maintains the clarity, but has a standard size that allows for faster production and delivery to companies at a lower cost. Aclar Accel 5400 is designed for opaque laminates and offers an even denser, moisture-rich barrier to companies seeking a more cost-effective solution to protect drugs than cold form foil in aluminum blister packaging, which has higher production costs and slower output.

“Pharmaceutical companies are seeking new packaging technologies that allow them to get their drugs to market faster and reduce operational costs and Aclar Accel addresses those needs,” said Ken West, vice president and general manager, Packaging & Composites, at Honeywell. “Companies have trusted Aclar for more than 40 years to provide the highest quality protection for their drugs and Aclar Accel gives them new choices. Now, in addition to the customized options of the original Aclar, they can select standard sizes for packaging with these new films and receive them in half the time.”

Honeywell’s Aclar films are based on polychlorotrifluoroethylene (PCTFE) fluoropolymer technology. They are crystal clear, biochemically inert, chemical-resistant, nonflammable, and plasticizer- and stabilizer-free. The films can facilitate increased patient compliance with doctor prescriptions with see-through, portable and patient-friendly pack presentations. Today, Aclar thermoformable films are used in a broad range of markets including originator and generic pharmaceutical, over-the-counter (OTC) pharmaceutical and animal health packaging.

Merck and Pfizer announced that the European Commission (EC) has approved Bavencio (avelumab) in combination with axitinib for the first-line treatment of adult patients with advanced renal cell carcinoma (RCC). The approval was based on positive interim results from the Phase III Javelin Renal 101 study, which demonstrated that Bavencio in combination with axitinib significantly lowered risk of disease progression or death by 31% and nearly doubled objective response rate compared with sunitinib in patients with advanced RCC regardless of PD-L1 status. The study included patients across International Metastatic Renal Cell Carcinoma Database Consortium (IMDC) prognostic risk groups. Improvement in progression-free survival (PFS) was observed across pre-specified subgroups in patients receiving the treatment combination.

“There is a high incidence of kidney cancer in Europe, and for the most common type, renal cell carcinoma, we continue to need additional treatment options, particularly for patients with advanced disease, where outcomes are poorest,” said Professor James Larkin, Consultant Medical Oncologist at The Royal Marsden NHS Foundation Trust and Professor at the Institute of Cancer Research (ICR). “We’ve seen a demonstrated efficacy benefit and safety and tolerability profile for avelumab in combination with axitinib across all prognostic risk groups in patients with advanced renal cell carcinoma, so today’s approval in Europe brings an important option that can help healthcare professionals optimize treatment strategies across risk stratification.”

In 2018, an estimated 136,500 new cases of kidney cancer were diagnosed in Europe, and approximately 54,700 people died from the disease.2 Many patients living with advanced RCC do not go on to receive additional treatment after first-line therapy, for reasons that may include poor performance status or adverse events from their initial treatment. The five-year survival rate for patients with advanced RCC is approximately 12%.

“This first European approval of an anti-PD-L1 as part of a combination treatment for advanced renal cell carcinoma builds on our commitment to bringing innovative treatment options to patients with hard-to-treat cancers through our extensive Javelin clinical trial program,” said Rehan Verjee, Global Head of Innovative Medicine Franchises for the Biopharma business of Merck. “RCC is the most common form of kidney cancer, accounting for 90% of diagnoses. We are now working to make Bavencio in combination with axitinib available for patients with advanced renal cell carcinoma as quickly as possible.”

“The European Commission approval of Bavencio in combination with axitinib has the potential to bring even more patients with advanced renal cell carcinoma a new first-line treatment, and it allows us to continue to deliver on our more than decade-long passion to do more for patients with kidney cancer,” said Andy Schmeltz, Global President, Pfizer Oncology. “We thank all of the researchers, doctors, advocates, patients and their families who helped get us here today, and we will continue in our fight against this advanced cancer.”