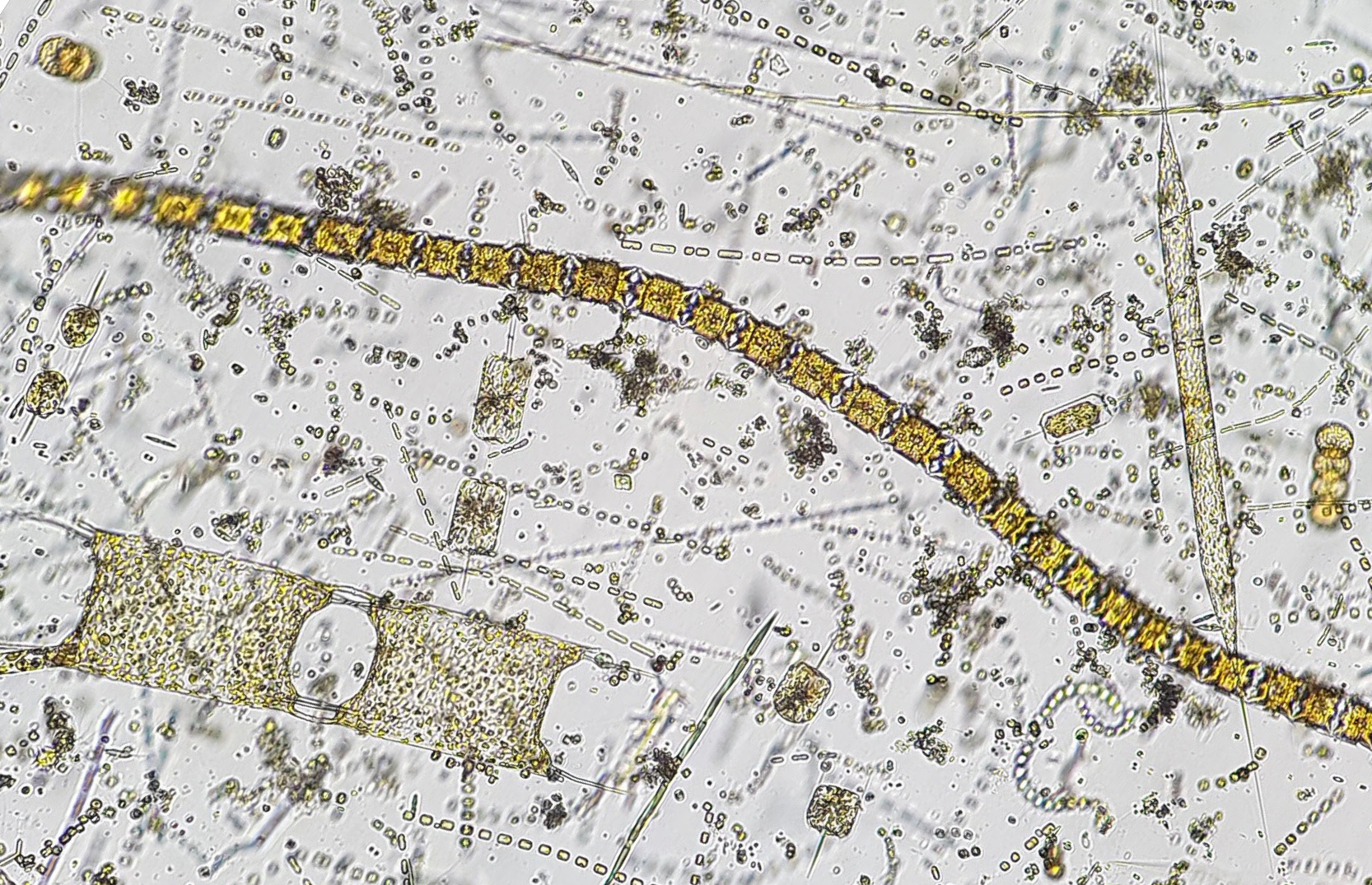 Researchers at the University of Oldenburg are analyzing data from the Lower Saxony State Office for Water Management, Coastal Protection and Nature Conservation. They found that higher temperatures could be the cause of smaller cells.

The cell volume of microalgae in the Lower Saxony Wadden Sea has decreased by 30 percent between 2006 and 2019. Diatoms in particular, known as diatoms, were affected by this shrinkage. This was reported by a team led by biodiversity expert Prof. Dr. Helmut Hillebrand from the Institute of Chemistry and Biology of the Sea at the University of Oldenburg in the journal Limnology and Oceanography. According to the team, the long-term trend could be due to rising temperatures and a decreasing level of the nutrient phosphorus in the North Sea. The decreasing cell size of unicellular algae could be an indicator of changes in the biotic community as a whole, the researchers said.

Phytoplankton – the extremely diverse group of unicellular algae that populate the light-filled uppermost layers of oceans, lakes and rivers – fixes about as much carbon dioxide per year as land plants and therefore releases half of all oxygen produced by photosynthesis on Earth. It therefore plays a fundamental role in the ecosystems of all bodies of water.

“The diversity of these organisms is remarkable, reflected for example in the extreme difference in size between the smallest and largest algal cells.”

On the one hand, the size of the plankton cells is characteristic for each species. On the other hand, cell volume is also related to environmental conditions. “So far, however, we have only a few data sets on how the cell sizes of individual species, but also of entire communities, change over longer periods of time,” says co-author Dr. Lena Rönn from the Lower Saxony State Agency for Water Management, Coastal and Nature Conservation (NLWKN).

To find out whether the size of the protozoa changes at all, how different species develop and whether there is a connection with changing environmental conditions, Hillebrand and his colleagues evaluated data from more than 1,700 samples. The NLWKN had collected and counted these samples at 20 different sites in the Lower Saxony Wadden Sea between 2006 and 2019. The team did not simply look at the average size of all cells within a sample – as most previous studies have done – but analyzed the development of each species individually. This allowed Hillebrand’s team to investigate whether a temporal trend can be attributed more to a displacement of certain species or to an adaptation of the individual species to changing environmental conditions.

The analysis showed that over the observed period of 14 years, the average cell size decreased by about one third. Both the individuals of the individual species and the cell volume within the community as a whole shrank. “We were able to detect the reduction in cell size in 63 of 73 species studied, and unicellular algae with a shell of silica, known as diatoms, were particularly affected,” says Rönn. The researchers also observed seasonal fluctuations: In summer, the average volume of the cells was significantly smaller than in winter.

According to the analyses of the researchers around Hillebrand, the reduction in size can probably be explained by increased temperatures and lower nutrient availability. As the team writes, many organisms form smaller individuals at higher temperatures than under cool conditions. “If you compare tropical, temperate and polar habitats, you can find many examples of this,” Hillebrand says. This correlation was also known for phytoplankton. In tropical seas, the trend is exacerbated by lower nutrient levels.

The researchers expect that the reduction in algae will also affect other organisms in the Wadden Sea habitat, especially those that feed on them, including animal plankton and mussels. The study also demonstrates the importance of maintaining and sustaining time series for ecological research, Hillebrand said. It was only because the team re-determined the cell size of the algal species in each sample that the researchers were able to determine their shrinkage in the first place. The result also makes it possible to calculate more precisely the carbon contained in the plankton, an important input variable for models in environmental and climate impact research. 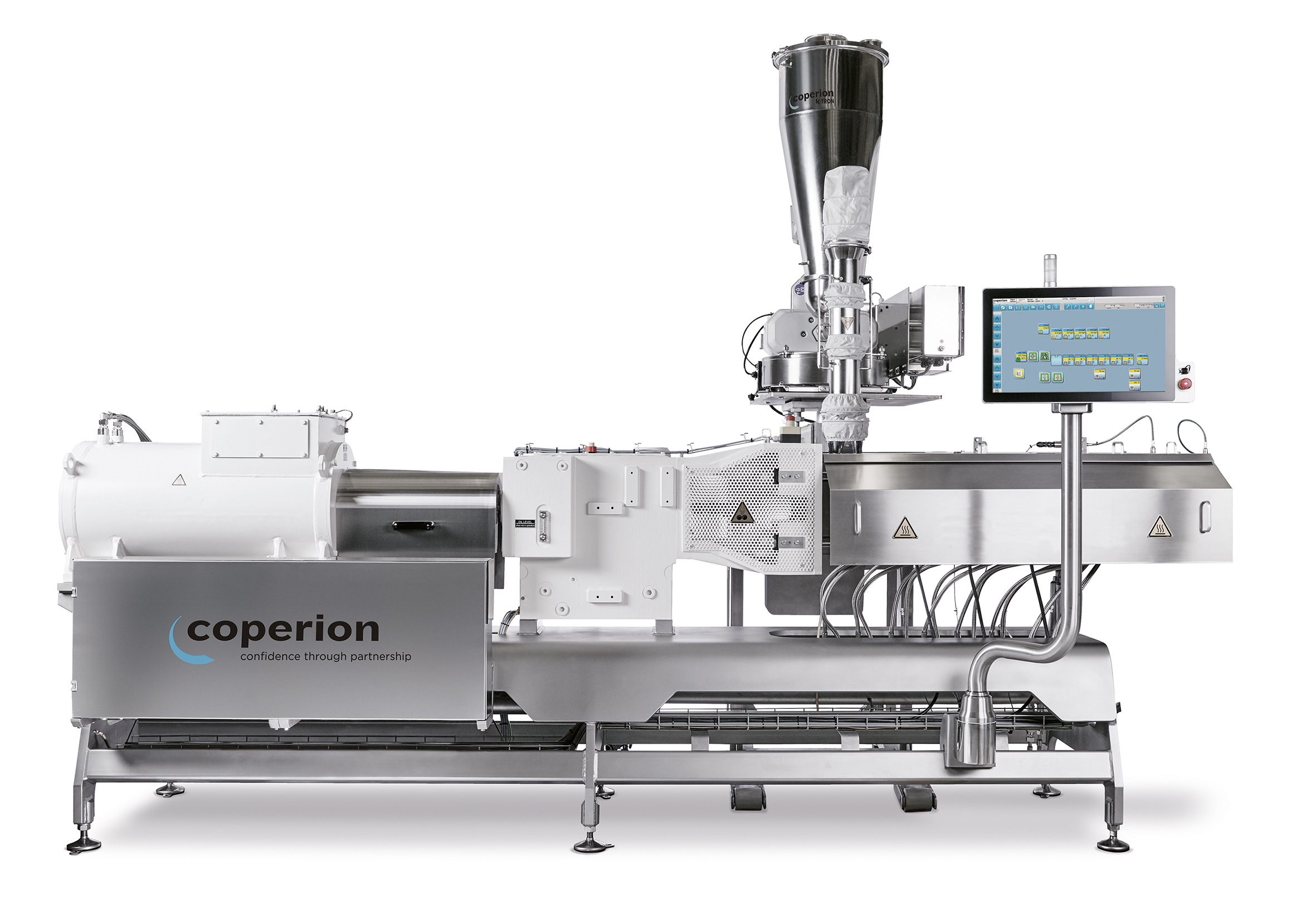 Two Coperion ZSK Mc18 twin screw extruders are part of the high-performance battery cell production facility planned by Cellforce Group – a joint venture between Porsche AG and Customcells Holding. Beginning in 2024, this new European production site will be a major force in Cellforce Group’s ability to serve the high-performance battery market segment for specialized automotive applications. The demanding manufacturing process will feature both state-of-the art extruders and highly accurate Coperion K-Tron feeders for the continuous production of battery compounds. With their high degree of flexibility, the two extrusion lines will be able to produce a variety of formulations. The continuous process structure ensures they are reproducible at consistently high product quality.

The outstanding mixing properties of the ZSK twin screw extruders was a key feature in their selection for this process. Their throughput can be precisely controlled to achieve an optimal overall process. The high degree of automation reduces operating costs in comparison to labor- and personnel-intensive discontinuous processes and results in reproducible, continuously high product quality.

Markus Fiedler, Process Technology, Team Leader of Chemical Applications at Coperion, “The excellent mixing behavior of the ZSK twin screw extruders makes it possible to achieve the especially high homogeneity required for the formulation of these high-performance batteries, which contains a high percentage of silicon. Their modular construction also facilitates adaptation to new recipes. Thus, future optimizations, such as the elimination of toxic solvents, can be implemented quickly and without impacting quality.”

One important aspect in the design of the process in general as well as the individual components is the safe isolation of the manufacturing process. Painstaking containment designs prevent impurities and contamination from toxic materials in the workplace and the environment. For this reason, the extruder and the high-accuracy Coperion K-Tron feeders are designed to be dust-tight, fulfilling the highest requirements for maintaining purity of the product and safety of the work environment.

“We are pleased that Coperion has been given the opportunity to contribute to this project with our twin screw extruders, feeders and material handling systems, thereby doing our part to move the energy revolution forward a bit. The Cellforce Group production facility will be the cornerstone for further projects of this kind in Europe,” Martin Doll, Business Segment Manager for Chemical Applications and Batteries at Coperion.

“We’ve reached a milestone here with an innovative process in cell production that allows us to launch a cutting-edge technology in Europe, in terms of both quality and capacity,” added Dr. Markus Gräf, Managing Director of the Cellforce Group.

Siemens is expanding its offering around the Sinumerik One “digital native” CNC. The new CNC generation from Siemens, which was introduced to the market in 2019, is also coming up with innovations in software and hardware this year. With the new Sinumerik V6.20 software, there are new technology functions for the Sinumerik One that simplify operation, reduce machine wear, and increase productivity. Siemens is thus demonstrating once again how the powerful Sinumerik One machine tool control system can be optimally used for digital transformation in a highly productive, flexible, and modular way.

With the new Y-turning function, Sinumerik One can now be used for machines that turn from the Y-axis, enabling up to 3 times the feed rate and resulting in increased productivity. New tool types were created for this purpose and all turning functionalities and cycles were adapted for these tools.

The Advanced Rapid Movement function is also one of the innovations in the technology functions. It enables time-optimized movement, which means that faster movements take place between machining operations. The part program does not have to be changed for this. Overall, machining can be up to ten percent faster. The function must be implemented together with the machine builder.

In the area of hardware, there are also innovations for the Sinumerik One that are designed to simplify operation: The new keyboards and Machine Control Panels (MCPs) are now available from 15 to 24 inches consistently to match the HMI. And the Simatic Industrial Thin Clients (ITCs) and industrial PCs are being launched with increased performance and a resolution of up to 1920 x 1080 pixels.

The new MCPs are also integrated in the digital twin of Sinumerik One (Create and Run MyVirtual Machine), so that the appearance and operation here correspond to the real CNC in every respect. In addition, the digital twin of Sinumerik One has been given new features that simplify engineering and work preparation. To mention just a few of the many innovations: The /3D option offers support for a second channel. In addition, each tool can be assigned an individual color, so that the ablated surfaces are color-coded depending on the tool used. The import of STEP format is an important feature especially for complex geometries of the clamping situation of a turning operation. Collision detection now also offers extensive functionalities such as the display of all collided bodies, NC program line and much more, so that the cause of collisions can be quickly investigated and eliminated.

Sinumerik One plays a central role in the transformation of machine tools in the age of Industry 4.0, outperforming previous generations of controllers in terms of PLC and CNC performance in machine operation, cutting speed, and data capture and processing power. With its integrated Simatic S7-1500F PLC, it offers up to 10 times faster PLC cycle times. With the Simatic S7-1500F PLC, Sinumerik One is fully integrated into the TIA Portal engineering framework, enabling standardization of all engineering tasks for operators of larger plants. Sinumerik One is fully compatible with the previous Sinumerik 840D sl controller generation in terms of programming and operation. This makes the changeover to Sinumerik One even easier. 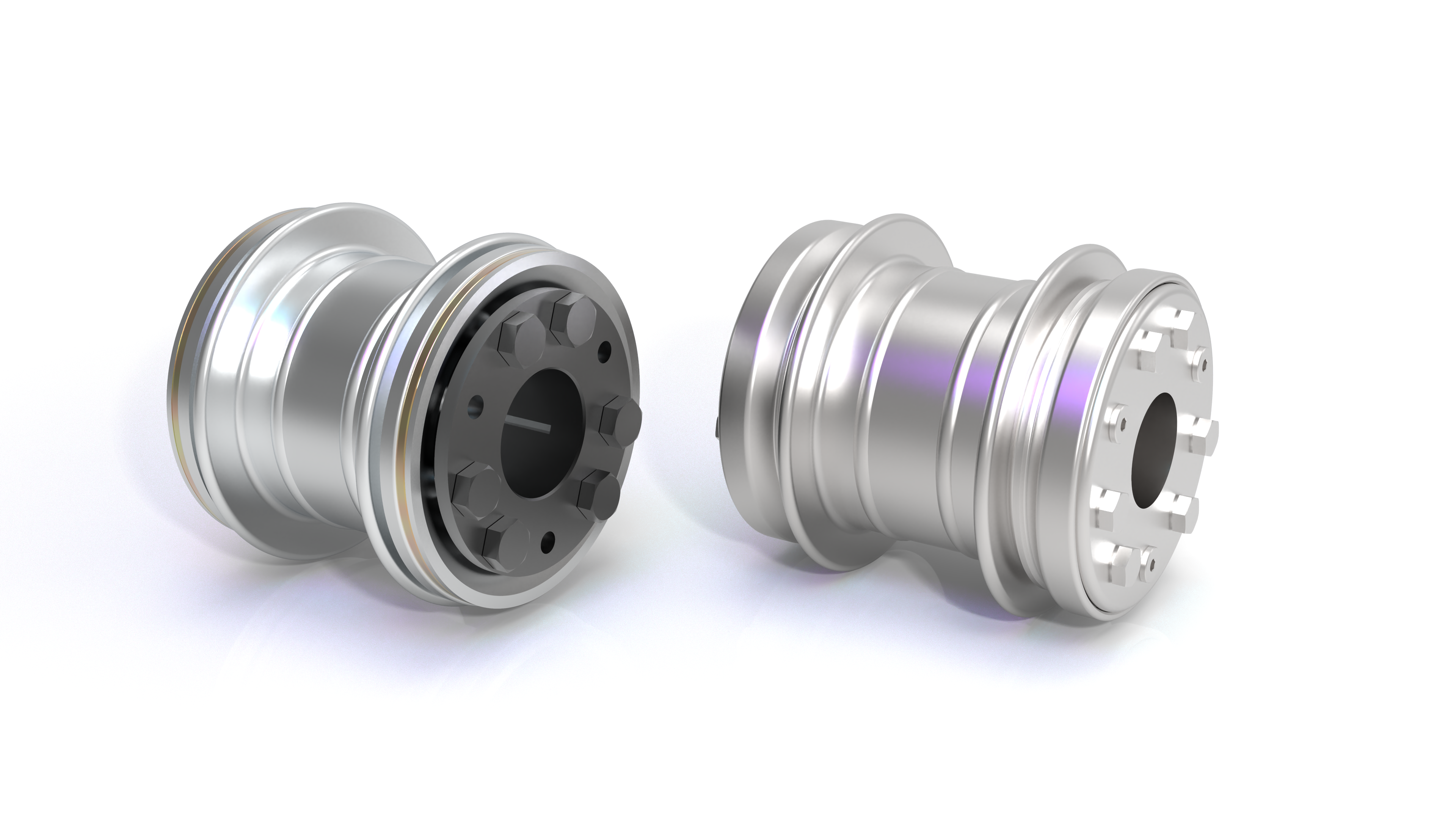 Special high-speed test benches are used to test bearings. In these tests, the effects of different lubricants on the sliding properties of the bearings in the endurance test are checked. The structural design of such a test rig must meet different requirements. The drive is subject to special conditions. In addition to a lateral force-free storage, the coupling is a not to be underestimated component. Essential features in this case are the absolute torsional rigidity, the good damping properties and, of course, the precise and almost powerless compensation of all offset errors between the shaft ends.

For such applications, torsionally rigid flexible couplings are generally ideal. The thin metal bellows have in addition to the balancing, also vibration-damping properties. The high flexibility of Jakob’s KSS couplings with its 2-wave bellows and straight adapter and the easy mounting option of the coupling through the use of cone bushings as a shaft-hub connection guarantee a safe transmission of all forces and torques, even with small shaft diameters and torques without additional feather key. The rotationally symmetric design ensures excellent, dynamic operating behavior, even at very high speeds. The high torsional rigidity and the very low restoring forces with shaft misalignment as well as the low moment of inertia characterize the coupling type. Torques from 25 to 2500 Nm are possible. Highest quality in processing and the materials used make the KSS couplings a reliable and economical component. It is used, in addition to the test stands as a highlighted example, also particularly often in servos and actuators.