Standing Ovation, a player in the food transition, announced today a Series A financing round of 12 million Euro led by Astanor Ventures, with the participation of Peakbridge, Seventure Partners, Big Idea Ventures, Good Startup, and of a leading player in the food industry. This round, completed less than 2 years after its creation, will be used to finance the next phase in the company’s development and scale its technology to meet industrial demand.

Standing Ovation’s ambition is to contribute to the agrifood transition by developing animal and lactose-free substitutes for cheese and dairy products, using dairy proteins produced by microbial fermentation. Thanks to a simple but innovative process, the company produces caseins, without any recourse to animal products. Caseins are not only the major proteins in milk (over 80 percent), but also the proteins that allow it to curdle and give cheese its functional melting and stretching characteristics customers are craving. Standing Ovation has shown that these caseins can then be used, with other products of vegetal or mineral origin, to obtain true replicas of cheese products, with a focus on fresh and soft cheeses.

The round, initially planned for a total of 10 million Euro, but oversubscribed up to 12 million Euro, will enable the company to finance its growth, and in particular to bring casein production process to industrial scale, to perfect its products and to initiate the regulatory process, while continuing to develop its R&D activity to create new products and formulations.

Frederic Paques, CEO of Standing Ovation, said: “Standing Ovation’s technology has a tremendous potential. However, bringing the products rapidly to the market requires significant resources, and substantial funding had become necessary. Astanor Ventures, which had already supported us at an earlier stage, understood it as did the other participants in this round. We would like to thank all our investor partners for their support and their confidence in the team.”

Romain Chayot, Scientific Director of Standing Ovation, said: “In only two years, we have developed a unique and highly technological process. We are now in a strong position to build on this momentum and transition towards more logistically intensive stages, especially scaling up.”

Eric Archambeau, co-founder of Astanor Ventures, said: “Standing Ovation’s technology represents a paradigm shift for the animal-free dairy market. Casein is the holy grail for the production of alternative options that match conventional products in nutrition, taste and texture yet it has remained notoriously difficult to create. The founders’ experience in biotechnology enabled them to find the key to casein development, a step ahead of many companies. We are greatly impressed by the team’s advancements over the past year both in product and process development and are excited to support them in this next step of their journey. 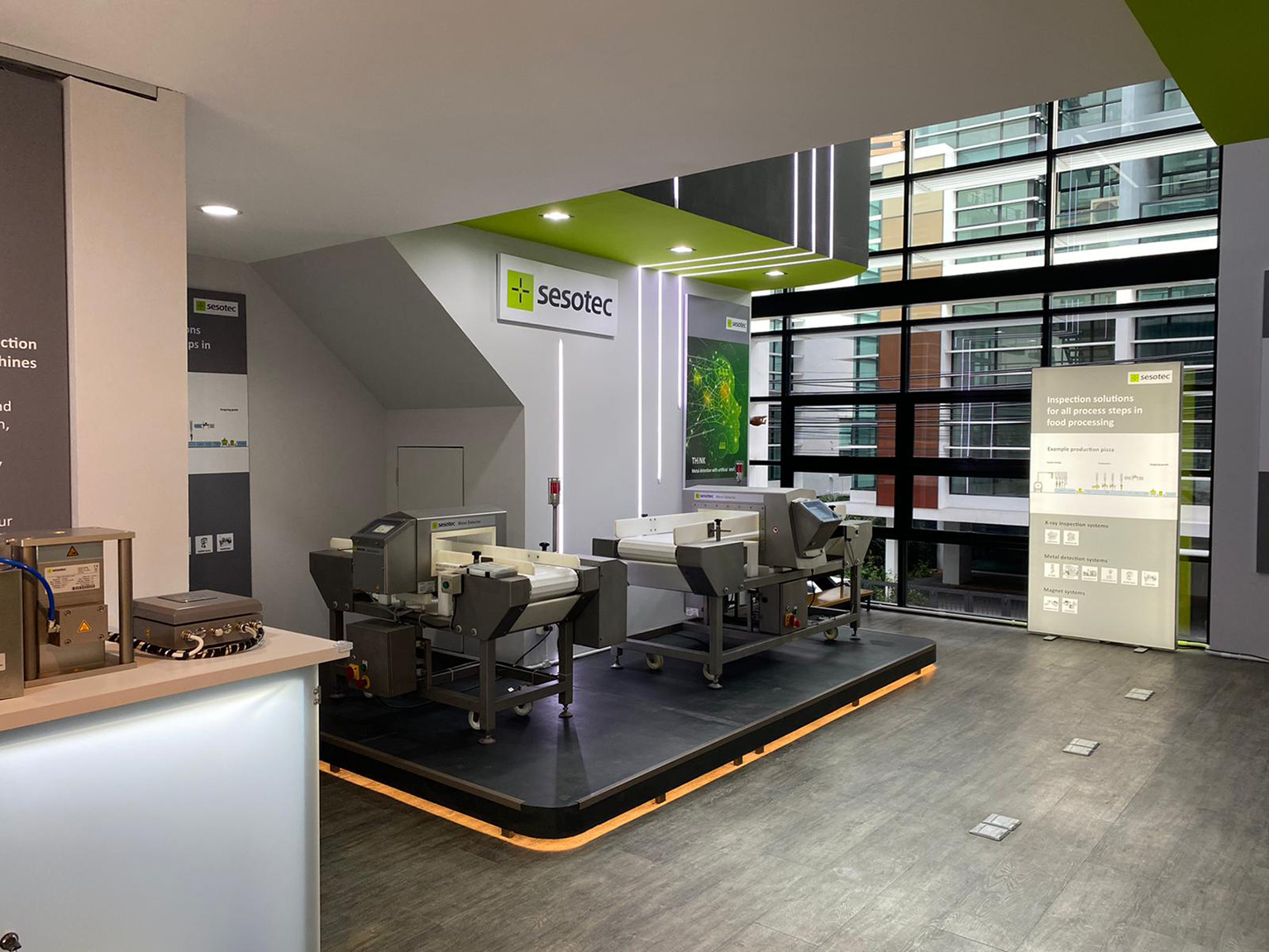 The Thai branch of Sesotec from Schönberg has moved and opened its new location with showroom in Bangkok on August 25. The premium manufacturer of magnetic, contaminant detection, sorting and material analysis systems presents its entire portfolio of metal detectors and X-ray inspection systems for the food and plastics industries spread over several floors. The modern building provides working areas for the Sesotec Thailand team and is open to customers as well as partners who wish to receive on-site advice or training.

With the new showroom, Sesotec is intensifying personal contact on site. In addition to a timeless, high-quality exhibition area, the new building also has excellently equipped training rooms. The specialist for contaminant detection, material sorting and analysis makes the presentation of its products and technologies a tangible experience: for example, metal detectors and X-ray scanners are available for customer events and test trials.

“For Sesotec, the exchange of ideas and discussions with our customers and partners is a top priority. Only in this way can we successfully shape cooperation and the future,” says Joachim Schulz, CEO of Sesotec, who traveled to Bangkok for the opening. Soontronrungsan Chairat, Managing Director of Sesotec Thailand and his whole team are proud that the new premises have turned out so well: “We are really looking forward to welcoming many customers and visitors in our great new location!”

After the technical center at Sesotec’s headquarters in Schönberg and the showroom in Dorsten in northern Germany, the new location in Bangkok is the next logical step towards making Sesotec’s high-tech innovations a reality in suitable surroundings and close to the customer.

Tackling growing sustainability concerns in the food-to-go and takeaway sector due to lack of street and kerbside recycling infrastructure, alongside functional packaging requirements, new specially coated board packs address both packaging and food waste challenges. Replacing all-plastic containers or hybrid filmic-laminated board solutions requiring a plastic liner for grease and moisture resistance, the new naturally coated board packs are uniquely protective, biodegradable and recyclable.

Applied to sustainably sourced cardboard, Notpla Coating is a unique mix of seaweed and plant extracts that provides a food-safe barrier function, and which disappears naturally in 4-6 weeks at end of life. Unlike PLA, Notpla Coating allows the pack to be both recyclable and home compostable and is based on one of nature’s most renewable resources – seaweed – which doesn’t compete with food crops, doesn’t need fresh water or fertiliser, and actively contributes to de-acidifying our oceans.

As the exclusive development and print partner for the new coated board packaging, Coveris have worked extensively with Notpla to deliver a fully printed, branded solution that works in combination with the sustainable coating. Using specialist water-based inks for added sustainable benefits, the printed packs are fully approved for food-contact and offer an advanced oil barrier function that outperforms plastic in most applications. Notpla has also devised a unique comparative test that shows just how rapidly Notpla Coating is broken down by nature, in comparison to other coating materials for food-to-go applications, while other industry testing is underway.

Available as both off-the-shelf Notpla own-brand takeaway boxes (at notpla.com) and custom printed formats, through Notpla’s existing partnership with Just Eat Takeaway.com the new packs were also introduced at the Women’s Euro 2022 final held at Wembley Stadium, marking the first time that biodegradable food packaging was used at a major football match in the UK.

Commenting on the collaborative project, Emma Moate Coveris’ Food-on-the-move category Director said “we’re really proud to have worked alongside Notpla as their development and print partner, marking a major step in delivering a more sustainable future for foodservice brands and products. Given the functional requirements of packaging combined with disposal challenges in this sector, the new coated packs really are the packaging of the future, supporting our journey towards No Waste through combined food and packaging waste reduction for our customers.”

Further expansion of the portfolio of plant-based ingredients

Now Beneo, one of the leading manufacturers of functional ingredients, has announced the acquisition of the Dutch company Meatless B.V.. This means that in the future, customers will benefit from an even wider selection of plant-based texturizers for meat and fish alternatives. At the same time, this step positions the company even more strongly as a major player in the growth market for plant-based texturizing ingredients. Marketing of the new ingredients, which are made from rice, field beans, wheat, peas, lupins and quinoa, among others, will initially focus on Europe. Global distribution of the expanded portfolio is planned.

“Just recently, we announced the investment in a new plant to process field beans. The acquisition of Meatless B.V. is now the next logical step. Once again, it allows us to demonstrate how important it is for us to further expand our business with ingredients for plant-based alternative products.”

– Andreas Herber, Member of the Executive Board

The acquisition comes against the backdrop of a strong increase in demand for plant-based products. According to market research firm Euromonitor, the annual growth rate of the fish and meat alternatives market is expected to average more than ten percent (CAGR) over the next five years.

Meatless B.V., based in Goes, the Netherlands, was founded in 2005. Specializing in textured vegetable ingredients, the company offers a portfolio of products derived from various vegetable raw materials – including rice, field beans, wheat, peas, lupins and quinoa. This range complements the ingredient portfolio and enables promising new combinations. In the future, customers will thus benefit from significantly greater choice and flexibility when developing meat and fish alternatives.

Andreas Herber adds, “The two companies complement each other perfectly. Beneo has many years of experience with functional ingredients as well as good access to plant-based raw materials. Meatless convinces with its innovative technology and a unique product portfolio. Together, we can offer our customers a versatile range of application solutions for plant-based meat and fish alternatives that are adapted to their needs. The acquisition also enables us to develop exciting new products while supporting our goal for greater sustainability.”