EN  9153 digital position indicators with data transmission via radio frequency are particularly suited for frequent format adjustments and can be mounted quickly and easily. They are connected to the EN  9150 control unit by radio frequency as a wireless system for quick positioning.

Inauguration of the modern corporate campus in the greater Houston area 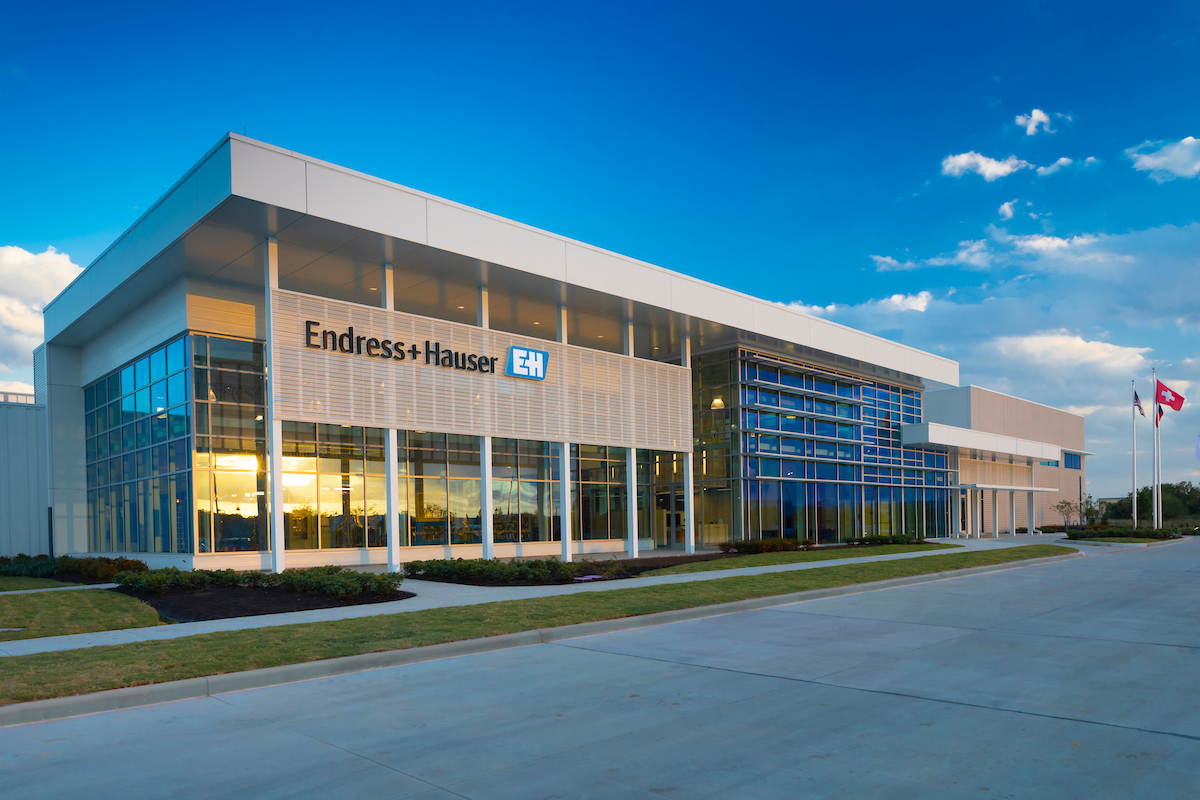 Endress+Hauser has invested $34 million in a modern corporate campus near Pearland, Texas, in the greater Houston area. A large new training center, office space for 110 employees, a calibration laboratory and a repair shop have been built on 112,000 square meters. The new building strengthens the Group’s presence in the Gulf region.

Located in Pearland, Texas, the building is in the heart of the economically strong Gulf of Mexico region. “The expansion reflects our strong roots in the USA. It demonstrates our proximity to our customers and helps us to serve them even better in the future,” said Matthias Altendorf, Group CEO during the dedication ceremony on October 26, 2021.

The new campus features the largest process training unit in the U.S., with 200 pieces of equipment and seven tanks, as well as a laboratory for metrology and process analytics. Local customers and partners can learn how to use modern measurement and automation technology here in customized training courses.

In addition, the campus is equipped for the accredited calibration of instruments for flow, temperature and pressure measurement. These can be carried out both in the laboratory and with a mobile calibration system at the customer’s site. A service workshop completes the range of services.

When planning the campus, the company placed great emphasis on sustainability. The building is already the fifth in the U.S. to be certified according to LEED (Leadership in Energy and Environmental Design) standards for environmentally friendly construction. In addition, regional materials were used in the interior and exterior to reflect Texas architecture.

Inauguration of Lauda Square at headquarters

Now LAUDA DR. R. WOBSER GMBH & CO. KG celebrated the inauguration of the new Laudaplatz at the gates of its headquarters in Lauda-Königshofen. In addition to the management, the shareholders and the management circle, important representatives of politics were invited to the inauguration ceremony under the open sky, namely mayor Dr. Lukas Braun, Prof. Dr. Wolfgang Reinhart, MdL, and Nina Warken, MdB. A total of around 50 guests attended the inauguration, which was held in compliance with corona rules. The LAUDA company can thus be found with immediate effect at the new address Laudaplatz 1.

“65 years old is our company, for 65 years the Pfarrstraße was our home”. With these words, the managing partner Dr. Gunther Wobser, introduced the historic change to the new company address in his speech. Laudaplatz 1 emphasizes the company’s claim to be the world market leader in temperature control technology and at the same time shows the company’s solidarity with the region and the town of Lauda-Königshofen. In addition, the family-owned company is opening up further to the public: “We have created a representative public square that invites the numerous cyclists, athletes and passers-by to linger.” With the new Laudaplatz, they have a “new, fine address for an expanding family business,” explained Dr. Gunther Wobser.

Words of praise from the world of politics

In his speech, Prof. Dr. Wolfgang Reinhart, Member of the State Parliament and Vice President of the State Parliament of Baden-Württemberg, praised the company’s openness to the world and its close ties to its home region. At the same time, he emphasized the extraordinary services that small and medium-sized businesses provide for the German economy. Member of the Bundestag Nina Warken also attended the inauguration of Laudaplatz 1. “The new address reflects the deep bond between Lauda-Königshofen and the LAUDA company,” said Nina Warken in her laudation. “As a global market leader, LAUDA made an important contribution both nationally and internationally during the pandemic,” the politician emphasized in her review of the past year.

She praised the company’s multifaceted social commitment and highlighted the lifetime achievement of Dr. Gerhard Wobser, the former managing partner, who also attended the inauguration as a guest. With a view to the new address, Nina Warken concluded her successful speech with “Nomen est omen”. The mayor of Lauda-Königshofen, Dr. Lukas Braun, presented the official street sign with the new address to Dr. Gunther Wobser at the inauguration. The town is proud of the company, said Dr. Lukas Braun: “I offer my sincere congratulations on this successful christening.”