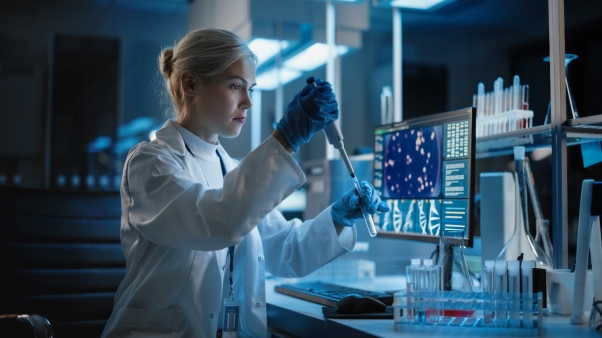 He points out that AI is only as effective as the data it can learn from, as evidenced by the problems in developing “self-driving” vehicles. As highlighted in recent Impact Wealth Magazine coverage, Verseon has broken free from this conventional approach and is bringing much-needed new treatments for cancer, heart disease and other deadly diseases to market. The company is also developing products that slow human aging and increase longevity.

Many market observers now believe that despite its $1 trillion a year in patent-protected revenues, the pharmaceutical industry, with its error-prone trial-and-error approach to drug development, is a growing obstacle to the development of much-needed therapies. Verseon’s founders recognized that the systematic development of entirely new drugs would require breakthroughs in molecular physics modeling to determine how a new chemical structure binds to a disease-causing protein.

Using its platform, the company has identified multiple new clinical candidates for each of its programs – a feat unprecedented in the pharmaceutical industry. The management team holds over 200 patents in total and is no stranger to breakthroughs. Co-founders Adityo Prakash and Eniko Fodor have patented technologies now owned by Intel that enable all video streaming from Amazon Prime to Zoom. Verseon’s third founder, David Kita, developed one of the first bioinformatics platforms that sparked the genomics revolution.

“The platform includes significant new advances in several different branches of science. Each of these advances would be greeted with enthusiasm by leading professionals in their respective fields, but taken as a whole, it is virtually unattainable by any other company. It is by far the most advanced ab initio method of drug development currently available.”

Verseon is currently testing drugs with remarkably low bleeding risk to treat and prevent heart attacks and strokes in more than 400 million patients worldwide. Uncontrolled bleeding is the biggest risk factor associated with current alternatives. One of the world’s leading cardiologists, John Deanfield, professor of cardiology at University College London, commented, “Platelet-sparing anticoagulants … represent an exciting opportunity in ‘precision medicine’ for the treatment of a large group of patients with cardiovascular disease.”

The company is also developing oral medicines to treat diabetic vision loss in more than 154 million patients, treatments for coronavirus and influenza, and three different programs to fight cancer – one of the world’s biggest killers. All of these products are part of a rapidly growing drug pipeline with 16 drug candidates in eight programs. Robert Karr, Pfizer’s former SVP of R&D Strategy, commented, “This platform finally ushers in the era of systematic drug discovery.”