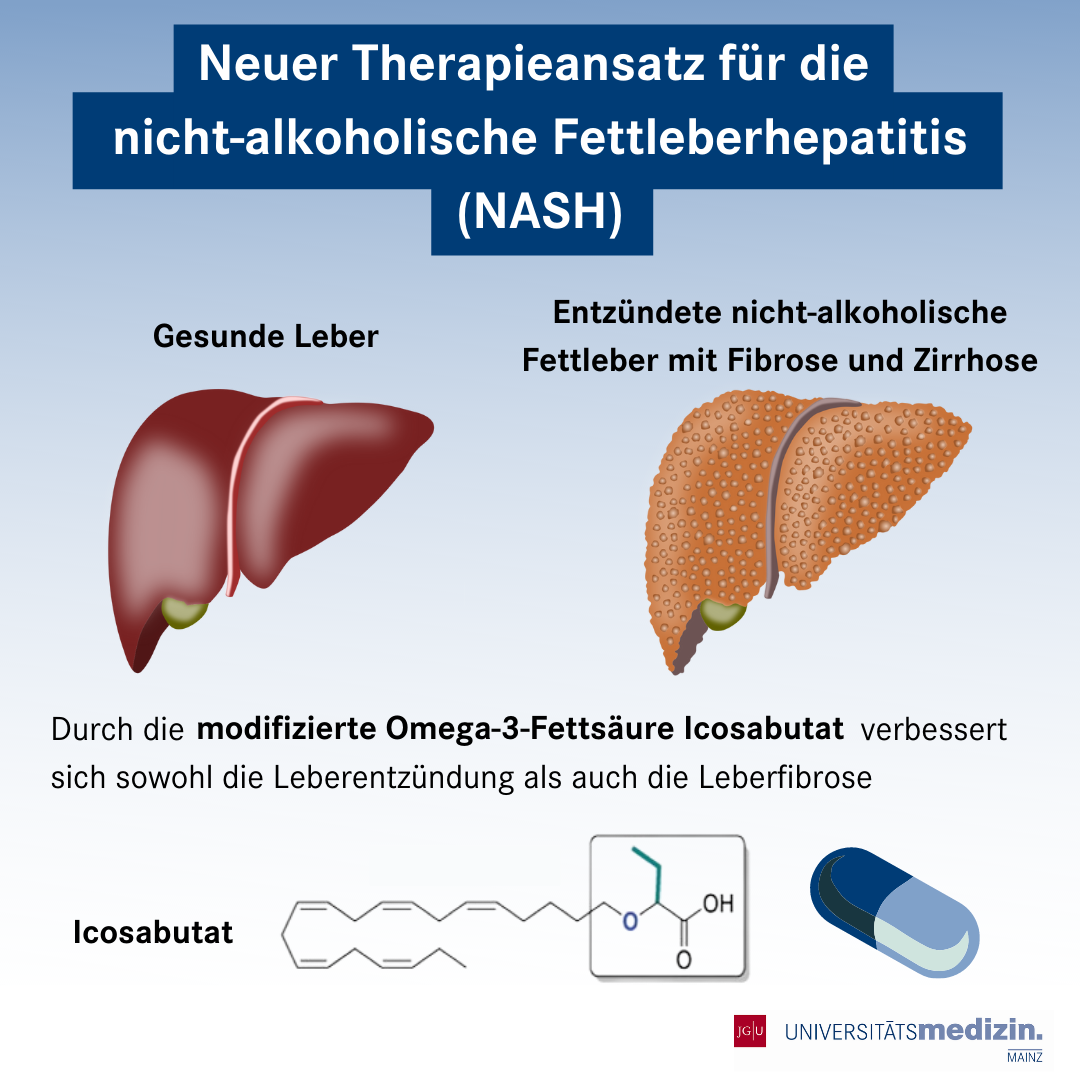 Scientists at the Institute for Translational Immunology at Mainz University Medical Center have co-developed a novel drug that could effectively treat non-alcoholic fatty liver inflammation: the modified omega-3 fatty acid icosabutate. In the ongoing phase 2b clinical trial “ICONA”, the positive results seem to be confirmed: The compound prevented inflammation and scarring of the liver. To date, there is no established therapy and no approved drug for non-alcoholic fatty liver inflammation. The research results published in the renowned scientific journal “Journal of Hepatology” therefore indicate a breakthrough for the treatment of this disease.

More and more people in industrialized countries around the world are suffering from metabolic diseases such as obesity, impaired fat metabolism or type 2 diabetes mellitus. Many of these patients develop fatty liver disease, known as non-alcoholic fatty liver (NAFL). In Germany alone, about 30 percent of the population has NAFL. NAFL does not cause any symptoms. However, about one in six NAFL patients develops fatty liver inflammation, known as non-alcoholic steatohepatitis (NASH).

If fatty liver inflammation becomes chronic, it leads to liver fibrosis. The collagenous connective tissue in the liver increases and the liver becomes scarred. Consequential diseases of fibrosis caused by steatohepatitis can be liver cirrhosis (shrinking liver), liver failure and even liver cell cancer. Treatment to date has initially been aimed at changing the diet of those affected and prescribing more physical exercise. Among other things, this is intended to achieve weight loss. This can improve NASH. As in the treatment of obesity, however, weight loss is often insufficient in most patients. There is currently no drug therapy available. Although numerous active substances are being researched, their approval has often failed due to insufficient efficacy or because they cause undesirable side effects.

“Together with the company Northsea Therapeutics, we have developed a potential drug for NASH and tested it extensively in vitro and in vivo with regard to its efficacy: the structurally modified omega-3 fatty acid icosabutate. This is a completely new class of substances. Icosabutate improved both liver inflammation and liver fibrosis. In an initial study with high-risk patients, a daily capsule of our active ingredient icosabutate normalized elevated blood levels of liver inflammation and liver fibrosis very convincingly and rapidly. Based on these promising results, a Phase 2b clinical trial (‘ICONA’) was initiated in the U.S. in which patients with severe NASH and liver fibrosis are treated with icosabutate over a period of one year. Here, treatment success will also be assessed by liver biopsy at baseline and at the end.”

The development of the new drug is based on known substances from fish oil, the omega-3 fatty acids. In addition to their positive effect on the cardiovascular system, omega-3 fatty acids are also involved in several processes that can regulate liver inflammation and fibrosis. This served as the starting point for the search for a drug that could treat chronic liver inflammation.

“In our substance icosabutate, we have changed the structure of the omega-3 fatty acid so that this active ingredient cannot be incorporated into the liver cells or consumed as ‘fuel’. Thus, there is enough unused icosabutate fatty acid in the liver to dampen inflammation and fibrosis. In this regard, the modified omega-3 fatty acid icosabutate is 50 times more potent than the natural omega-3 fatty acid. We are optimistic that the compound we have developed will lead to the first effective therapy with clear benefits for the many people affected by NASH. This would be another major success for the translational development of a drug from basic research into clinical application – a central goal of our Institute for Translational Immunology,” said Professor Schuppan.